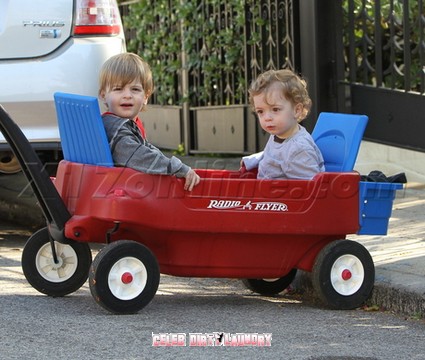 Druggie mom Brooke checked into an undisclosed rehab center last week and is expected to remain in treatment for at least the next 60 days. However, despite her absence, Charlie hasn’t asked to spend any time with his two-year-old boys.

“Charlie last saw the boys about three weeks ago,” a source says – “He hasn’t requested to see the boys more now that Brooke is in rehab.”

“Bob and Max are being cared for at Brooke’s Los Feliz estate by her mom, Moire Fiore, and her sister. These boys are surrounded by love thankfully, but sadly it’s just not from their parents.”

Even though Mueller is in rehab, Charlie won’t be going to court to seek a modification in child support to Brooke. She currently receives $55k a month from her ex-husband – hopefully not all of it goes on crack.

“Charlie has been advised that going to court could backfire. Judges have been known to increase child support when the custodial parent isn’t able to take care of the child, and that care is being handled by another family member.”

“If the judge perceives that a temporary guardian is having increased costs, well, that would be passed along to the parent paying the support,” the source reveals.

Meanwhile, Sheen has been “holed up at his Beverly Hills mansion. Charlie isn’t working right now, but he just doesn’t seem interested in seeing Bob and Max.“

“Charlie goes through phases where he is a very involved and doting parent, and then to the other extreme of not having any contact whatsoever with the boys,” according to the source.