Chris Evans’ Pec Injury Shows He Is No ‘Captain America’ 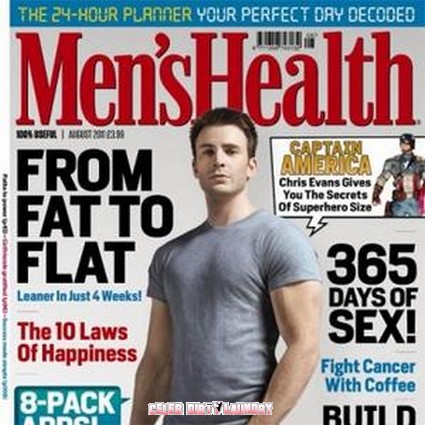 Chris Evans went public about hurting his left-side pectoral muscles while working out to prepare for his role as ‘Captain America’.

Chris had to bulk up to take on the role of Captain America in ‘Captain America: The First Avenger’ and although Chris claims to love exercise, the punishing regime was too tough on his body – especially his pectoral muscles. Perhaps Chris should have taken more steroids… .

He said: “I don’t think my body is supposed to be as big as it got for Captain America. There was a strain on some joints. After a month and a half of training I found my right shoulder would click and my left pec would hurt. It was an ever-evolving workout, in which we always found ways to work around the parts of me that were sore. There are certain things that hurt more than others. But that seems to be pretty universal. Every guy I know has some sort of freak injury in their body.

“I’m a big fan of working out on my own. I put my headphones on and I’m pretty good at self-motivating. At the end of the day, I enjoy it. Once I’m there and once I get going, I tend to love it, and I feel good. If I don’t work out for a couple of days I feel lousy.”

Although he was happy with the results, Chris won’t be rushing to bulk up quite so much again, admitting the daily workouts were “brutal.”

He explained to Men’s Health magazine: “It was gruelling, it was brutal and I’d find any excuse possible not to go. But I had to do it. I wasn’t trying to lose or tone – I was just looking to gain. The rule of thumb was: if you’re not eating, go get something.”

The full interview appears in the August issue of Men’s Health magazine, on sale Monday July 4.