BY Rylee Nelsen on May 3, 2011 | Comments: one comment
Related : Chris Hemsworth, Kristen Stewart 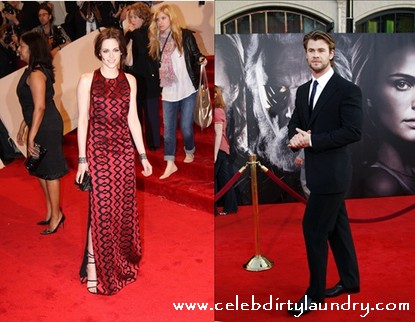 Kristen Stewart is all set to play the lead in Snow White and the Huntsman. With the filming approaching, rumors are circling that her costar could be none other than the buff Chris Hemsworth.   Hemsworth has yet to confirm or deny the rumors.

The more important thing is the guy’s body. It is a known fact that Hemsworth has one of the best bodies in Hollywood. His Avengers costar Chris Evans has admitted that he keeps a picture of Hemsworth with him at the gym in order to get inspiration!

To this information Hemsworth replied, “I should have a picture of him!” Hemsworth laughed. “The bloke looks great. [But] if he wants a little healthy competition…”

Hemsworth’s Thor costar Jaimie Alexander says that she had trouble keeping her hands off his body during filming. Alexander said, “I have touched his pecs,” she gushed. “Sometimes you’ll go up to him, you’ll be like, ‘Chris, how are you?’ And then you’re like, ‘I meant to shake your hand.’ He could flex for me any day and I’d be totally OK with this…He’s a stunning human being.”