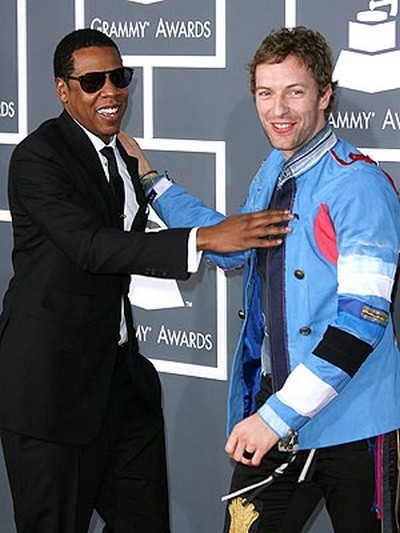 So who knew that Coldplay’s Chris Martin and Jay-Z was so close?   Not that they are an unlikely duo, I just have never seen the buds hanging together.  But hang they do, according to Chris who sat down with Pitchfork magazine:

“I love his music, and he’s a super cool guy, and he’s genuine. I respect his decisions, and we have the same feelings about trying to be true in your art. It just happens that one of us is a nerd and the other is the coolest multi-entrepreneur on the planet.”

And Chris is soooo lame!  Ya right – his latest album with Coldplay, Mylo Xyloto is amazing, and he is hitched to actress Gwyneth Paltrow.  The two were among guests at Jay-Z and Beyonce’s wedding and both Gwynnie and B are said to be good friends as well.

“We do play touch football. He’s very good at American football – not only does he have all these other talents, but he can throw a perfect spiral,” Martin adds. “And then, on the other end, it smacks me in the head. In England, no one teaches you how to throw a spiral, so mine looks like an egg slowly limping through the air.”

How cute..friends who play together, stay together.