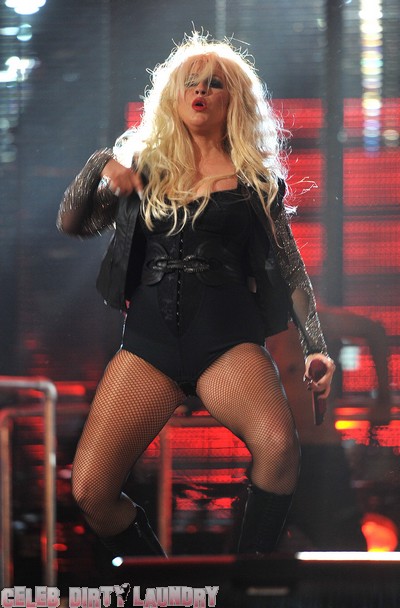 Christina Aguilera poured herself into a tight one-piece to pay tribute to the late King of Pop, Michael Jackson at the Michael Jackson Forever Tribute Concert in Wales on Saturday.

I have to wonder what was going through her head when she was planning this outfit for the concert. Doesn’t she have a staff of stylists to let her know when she steps into a fashion nightmare such as this? Besides that, people all over the world are going to see this.

What’s sad is that Christina is so talented, but we wonder where the line is drawn when her poor fashion sense overshadows her talent?

And what is up with that rat’s nest on top of her head?!? She looks like a blonde Snooki in this whole getup. Seriously, and even Snooki doesn’t look like that anymore. Can Christina clean it up?

I’ll eat all of these words if she turns out to be pregnant, which I’m guessing is a possibility. Either that, or she’s got issues that she’s using food to help her sort out.

What do you think? At least, later on in the show, she opted to wear something that was more figure flattering.

Check out the thumbnail photos below: