Christina Is Annoying The Other ‘Voice’ Judges 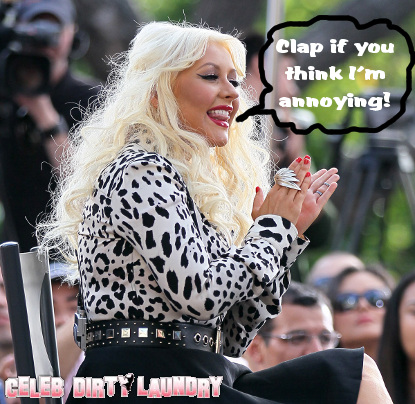 Apparently, Christina Aguilera is being a real pain in the ass on The Voice, that semi-ridiculous new singing competition. It recently became known that Christina is getting paid a whopping $225,000 dollars per episode whereas the other judges are only receiving $75,000. On top of that, people close to the show says she’s incredibly demanding and basically an attention whore, choosing only to talk when the camera is rolling.

Blake Shelton and Adam Levine seem to have the biggest problem with her, while Cee Lo and his incredibly short little arms are trying hard to stay on a neutral ground (way to be a good celebrity, Cee Lo, I knew I liked ya’)

A source had this to say:

“They are all so annoyed by her. Every time she walks away with her entourage, they talk about her behind her back. She holds people up and never apologizes. When the cameras are rolling, she literally won’t shut up. It is all about her.”

Oooh, that’s a burn that calls for some ice!

Adam Levine, who is clearly annoyed with Cristina and has allegedly gone as far as to form an “anti-Aguilera” alliance with Blake, has verbose reps who are trying to smooth over the situation. But we know how Adam really feels. And you know what? That’s fine. There isn’t always room for a diva on the set of a show focusing on new and rising talent. Stay strong and stand your ground, Levine!

You shall prevail . . . if all you judges don’t doom the show to oblivion before it reaches the end of its first season that is.