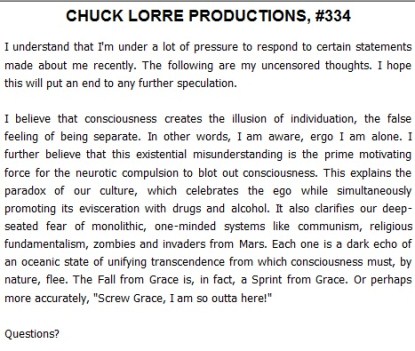 Two And A Half Men’s creator and executive producer Chuck Lorre again used a vanity card to sound off on Charlie Sheen Monday.  Lorre emphasized that our culture promotes “its’ [own] evisceration with drugs and alcohol” in a shot clearly directed at Charlie.

Lorre, who is responsible for TV hits like Dharma & Greg and The Big Bang Theory, has been using his own version of vanity cards – the full screen graphics that air for a split second at the end of his shows – to communicate his thoughts on the Charlie Sheen situation.

The vanity card following Monday night’s Mike & Molly read, “I understand that I’m under a lot of pressure to respond to certain statements made about me recently.  The following are my uncensored thoughts.  I hope this will put an end to any further speculation.”    “I believe that consciousness creates the illusion of individuation, the false feeling of being separate.  In other words, I am aware, ergo I am alone.  I further believe that this existential misunderstanding is the prime motivating force for the neurotic compulsion to blot out consciousness.”This explains the paradox of our culture, which celebrates the ego while simultaneously promoting its evisceration with drugs and alcohol.  It also clarifies our deep-seated fear of monolithic, one-minded systems like communism, religious fundamentalism, zombies and invaders from Mars.  Each one is a dark echo of an oceanic state of unifying transcendence from which consciousness must, by nature, flee.””The Fall from Grace is, in fact, a Sprint from Grace. Or perhaps more accurately, ‘Screw Grace, I am so outta here!’  “Questions?”

Luckily For Lorre his scripts are much more clever than his vanity cards.  The only “monolithic, one-minded system” that Charlie fears is the corporate bullying beast that is the new axis of evil – Chuck Lorre and CBS!