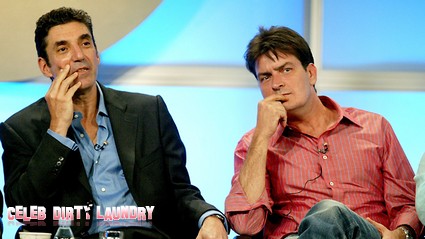 Chuck Lorre is a big liar – after trashing Charlie Sheen in every way possible – including writing nasty vanity cards that appeared at the end of his shows – he has the gall to claim that he told Warner Bros. and CBS to fire Charlie from ‘Two and a Half Men’ to prevent his overdosing on cocaine – and that it was a ‘moral’ decision.

As If! I mean does Lorre think we are all stupid? In what way was firing Sheen and subsequently engaging in an prolonged public brawl with the enraged actor going to stop his drug abuse? Had Lorre reached out to Sheen and tried to get him into rehab we might think better of him – but as things stand, by slamming the door in Charlie’s face and then hiring Ashton Kutcher to replace him – we don’t believe anything Lorre has to say now.

Speaking with TV Guide Magazine, Lorre said Warner Bros and CBS “chose to make a moral decision as opposed to a financial one” in sacking Sheen – an actor who earned over $1 million per episode and had risen to become the highest paid actor on US television. Lorre was quick to stress the seriousness of Sheen’s dismissal, saying, “This was not a game. This was drug addiction writ large. This was big-time cocaine, and in his own words, an epic drug run that could have ended with either his death or someone else’s.” The producer, who described Charlie as a “friend”, said he feared the actor would kill himself during breaks in filming, explaining, “When we would shoot a show on a Friday night, there was always that I’ll see you Monday. I hope. The holidays were the worst, because those long stretches of time were the ones we feared the most.”

Lorre had Charlie killed on the show, but not satisfied with that, he also has his cremated remains dropped on the floor and the ashes trodden upon. Lorre has showed himself to be a bitter and peevish little man – and now we have to witness the phony telling the world he ostensibly fired Charlie for his own good. Charlie was fired because he was becoming an embarrassment to Warner Bros. and CBS – and because he publicly insulted the great Chuck Lorre.