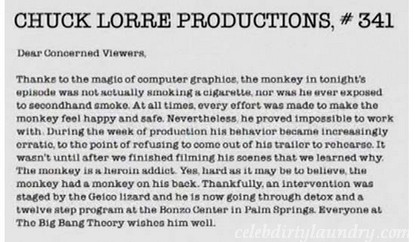 Just when you thought Two And A Half Men creator Chuck Lorre was done taking pot shots at Charlie Sheen, he does this. For last night’s vanity card on The Big Bang Theory, he put the above notice, with regard to a monkey that was “impossible to work with”.

Thanks to the magic of computer graphics, the monkey in tonight’s episode was not actually smoking a cigarette, nor was he ever exposed to secondhand smoke. At all times, every effort was made to make the monkey feel happy and safe. Nevertheless, he proved impossible to work with. During the week of production his behavior became increasingly erratic, to the point of refusing to come out of his trailer to rehearse.

It wasn’t until after we finished filming his scenes that we learned why. The monkey is a heroin addict. Yes, hard as it may be to believe, the monkey had a monkey on his back. Thankfully, an intervention was staged by the Geico lizard and he is now going through detox and a twelve step program at the Bonzo Center in Palm Springs. Everyone at The Big Bang Theory wishes him well.

Is it possible that he’s still trying to slyly take aim at Charlie? Or do you think he’s talking about some other “erratic” actor? Or could the monkey really be a heroin junkie? Ha. No.