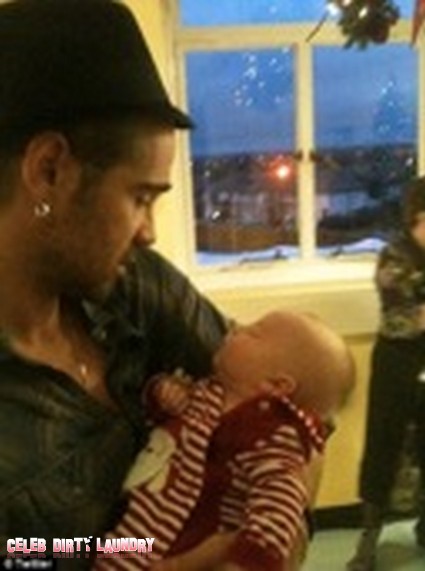 If this doesn’t make him sexier to you, you are dead inside! Colin Farrell took some time out of his busy schedule yesterday to spread some holiday joy in his hometown. The “In Bruges” star dropped by the Our Lady’s Children Hospital in Dublin to visit with some of the patients too sick to be at home. Farrell came with over a hundred presents for the kids and took time to chat and take photos with them and their parents.

The Golden Globe nominated actor is notorious for his foul mouth but according to parents who met him at the hospital, Farrell was on his best behavior. One impressed parent tweeted, “Just met Colin Farrell he came to meet the kids in crumlin hospital really nice man. fair play to him putting a smile on the childrens faces.” The same parent also wrote, “the whole hospital… presents. Farrell is a real genuine guy alright.”

The most impressive thing about this visit was that it doesn’t seem contrived by a cunning PR team. 35-year-old Farrell came alone without the media in tow. One parent tweeted “Just chatting with #ColinFarrell who is in with presents for the kids here in #Crumlin. No tv/media, a gentleman and genuine.”

Farrell has a 2-year-old son named Henry with actress Alicja Bachleda-Curtis, and an 8-year-old son named James with Model Kim Bordenave. In 2008, Farrell disclosed that his son James has a rare genetic disorder called Angelman Syndrome, which is characterized by an intellectual and developmental delay. Farrell, who at times has seemed a little rough around the edges, appears to have been softened by his children. In 2007, the actor was the spokesperson for the Special Olympics World Games in Shanghai, China. A bad boy with a good heart? Swoon!!!