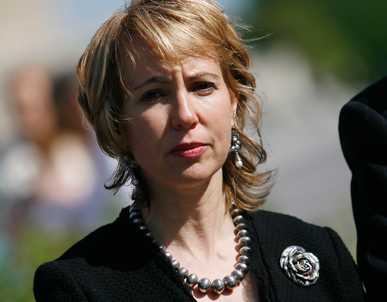 Congresswoman Gabrielle Giffords medical condition was upgraded from critical to serious condition today after doctors determined that there were no complications from having her ventilator removed a day earlier – she also has movement on both sides of her body.

Giffords is breathing on her own through a tube inserted in her windpipe. She had been breathing independently, but the ventilator had been in place as a preventive measure.

In a statement released Sunday afternoon, Tucson’s University Medical Center reported that Giffords ‘continues to do well. She is breathing on her own. Yesterday’s procedures were successful and uneventful.’

Giffords (D-Ariz.) was among 19 people shot during a rampage at a campaign event Jan. 8; six died including Federal Judge John Roll and 13 were injured in the brutal rampage carried out by Jared Lee Loughner.   Ten of the survivors have been released from the hospital including Giffords’ aide, Pam Simon who was shot twice, and two others are listed in good condition, medical officials said.

Captain Mark Kelly, Giffords’ husband, is scheduled to do his first TV interview this week with ABC’s Diane Sawyer.  I’ll just bet that Sarah Palin will be watching that interview… and I don’t think we’ll be hearing her slogan ‘Don’t retreat, reload’ quite as often now.  Of course all of the media fallout insinuating that Palin’s crosshairs map of her political opponents – including Gabrielle Giffords – might have been a motivation for Jared Lee’s murderous rampage in Tuscon has not deterred Palin from planning to deliver the keynote address at the Safari Club International gun convention on January 29.