Cory Monteith Had A Crippling Drug Problem Before GLEE 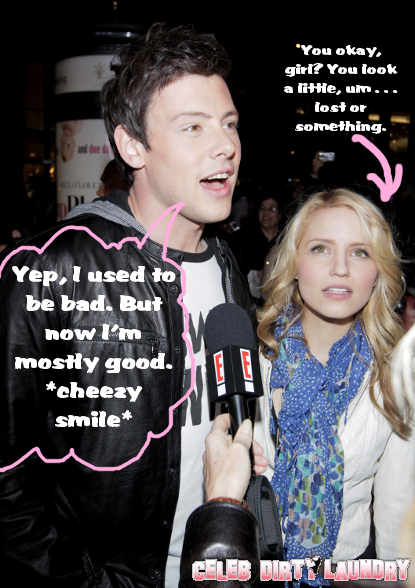 Cory Monteith, best known for his role as Finn Hudson on Glee, says he’s “not Finn Hudson.” In an interview with Parade, which will be available this Sunday, the actor gave revealing insights into his past and proved that — prior to landing his gig on Glee — he was everything but the grinning/singing football star of William McKinley High School.

Monteith, age 29 (um, I don’t think he should be in high school anymore), admits that he is lucky to be alive after his constant pot smoking, which, by the age of 16, had evolved into a much more serious addiction — heavy-heavy drugs. “I was out of control,” Monteith tells the magazine. “Anything and everything, as much as possible. I had a serious problem.”

After his friends and family staged an intervention, the young actor found himself in rehab, but to no avail, reverted to his old ways once released.

“I did the stint but then went back to doing exactly what I left off doing. [A while after] I stole a significant amount of money from a family member. I knew I was going to get caught, but I was so desperate I didn’t care.”

Monteith’s prediction was correct: the family member confronted him and accused him of being a thief. In “the first honorable, truthful thing that had come out of [his] mouth in years,” Monteith took responsibility for his actions and was given a proposition in return: get clean and healthy or face robbery charges.

It’s at this point where Monteith’s life begins to make a turn for the better.

“I was done fighting myself. I finally said, ‘I’m gonna start looking at my life and figure out why I’m doing this.’ I don’t want kids to think it’s okay to drop out of school and get high, and they’ll be famous actors, too … But for those people who might give up: Get real about what you want and go after it.”

Wow, it’s like some inspirational Lifetime Original Movie, huh? Well, we’re glad the Glee star eventually found his way in life. And with that being said, please understand, Mr. Monteith, that it is time for you to graduate from the Glee Club.