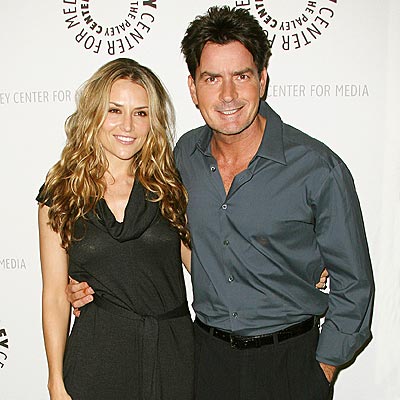 As we posted yesterday Charlie Sheen and his ex-wife Brooke Mueller can’t work out their differences where their children are concerned — so they will be fighting it out in court.   But a fight in court will not be good for either of them since their is a wealth of dirty secrets that could be spilled by both parties.  So they both have motivation to stay out of court.

“A public all-out war between Charlie and Brooke will be devastating to both,” the source said. “They each have so much dirt on the other it’s amazing.  “People think they’ve heard everything about Charlie but they haven’t. And Brooke knows his worst secrets and hasn’t unloaded them yet.”

“Charlie has done things with Brooke that the public doesn’t know about. I’m talking about in the arena of sex and drugs, and these things are shocking, even for Sheen,” the source said.  “And while Charlie has shown some of the goods he has on Brooke, he has a lot  more. He can hurt her as badly as she can hurt him.  “Going to court and waging all-out war will harm both of them badly.”

At the end of the day these two should try to work their disagreements out in private – the only one they will end up hurting is their children.  However, after having seen Charlie Sheen’s 3rd Ustream I cannot see how any judge in his right mind could award custody of those children to him.    He is not in any state of mind to have children near him.  What do you think?  Let us know?