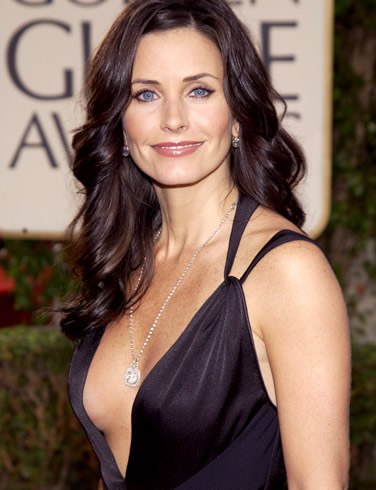 Courteney Cox spoke publicly about her split with David Arquette for the first time, as the ‘Cougar Town’ star told a Q & A panel at an entertainment industry event called the Winter TCA (Television Critics Association) that her “life is kind of crazy right now.”

The 46-year-old Alabama beauty queen, who rarely discusses her personal life, opened up in the wake of her well-publicized October 2010 split with David Arquette.  She was the first person at the event to bring Arquette’s name up – “I think I have a fancy palate — at least that’s what David always used to say to me,” Cox joked.

When she was asked about how she deals with her longtime fame, Cox said, “I think I’m kind of used to it.  Probably as I get older I’m probably getting a little more sensitive.”  She added, “So, it might be harder in some ways. Obviously, my life is kind of crazy right now. So, getting a lot of that. It’s probably a little harder for me than it used to be, I think I just didn’t notice.”

Cox was also asked if she lets her 6-year-old daughter Coco watch her overtly sexual ABC series and answered “If I say yes, am I a bad mom?”  Not waiting for an answer to this rhetorical question she went on “I do, I tell her to close her eyes when it’s inappropriate, but she does.”

Coco will have plenty to talk about with her therapist when she gets older… .  Cox did not talk in depth about her split with Arquette or if the couple will actually divorce.  She would not discuss David’s current attempt at rehab for drinking and depression issues.  Guess she’s still hoping for a reconciliation.