Courtney Stodden Did Not Have A Boob Job! 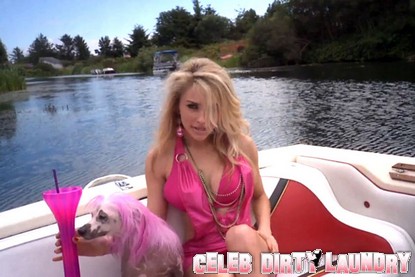 Sixteen-year-old wannabe singer/model, Courtney Stodden, shocked the world when she married 51-year-old actor Doug Hutchison. Since, there have been rumors suggesting that she had a boob job!

She’s refuting the reports and instead of simply issuing a statement saying that the rumors are not true, she’s hired a doctor to feel her up. Go figure.

Dr. Gabriel Chiu, a board certified plastic surgeon from Beverly Hills did the deed, with her permission, in order to disprove the circulating rumors that her boobs were fake. He said, “In my professional opinion Courtney Stodden does not have implants. Her breasts are 100 percent natural and organic.”

And how does he know? He performed a series of tests, of course. He said, “I did four tests to determine that she has not had breast implants. I looked and carefully examined the four areas where someone would normally have a scar from surgery – the armpit, aureole border, the belly button and the fold under the breasts, and Courtney did not have any scars. If you know how to look for the scars you can find one and I did not find a scar.”

He went on to reveal, “I did a breast examination and Courtney’s felt like normal breasts. If someone has implants either below or on top of the muscle you can squeeze and felt the implant moving around but I did not feel implants in Courtney.”

He continued, “There is a test where a patient holds their palms in front of their face and pushes their palms together. If there are implants they will rise, but when Courtney did the test, her breast did not rise. No implant was identified.”

He added, “When a person with implants lies down the implants will stay perky, they won’t fall and if they’re put in through the armpit they will ride up but when Courtney laid down neither happened. Her breasts fell like natural breasts do.”

Does anyone else find this at all creepy? I can’t say that I would let some doctor squeeze my boobs just to prove they’re real, especially if I was only a teenager. What do you think?