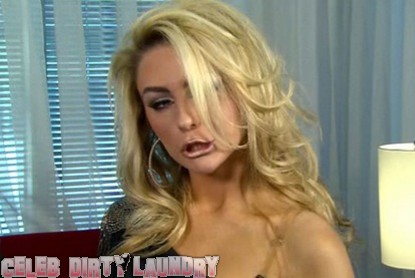 I’m not even sure why I’m writing about this non-celebrity, but her situation is just so sad that it’s almost comical. Courtney Stodden first made headlines when she married 51-year-old actor, Doug Hutchison. The problem? She was only 16. Today, Courtney turned 17-years-old and what did she get for her birthday??!? LINGERIE. Ugh.

This situation is gross and obviously not that well thought out. Her husband, who is old enough to be her grandfather, took her out shopping for lingerie from Victoria’s Secret for her birthday. Eww.

She said, “I’m so happy. This is the best birthday ever. Seventeen is going to be even better than 16 because I’m going to spend the whole year with my wonderful husband!”

Did we say ewwww, yet? Because ewwwwww.

Apparently, they had an outing planned for Disneyland, but decided to cancel it due to the heat. Instead, he took her shopping at her favorite store. Of course it is…have you seen this girl’s Twitter account? If you’re not comfortable with the inappropriate parts of this article, then you might want to stay away from her Twitter. Yes, it’s that bad. Here’s her last message, “Celebrating the last night of being sweet-n-sexy 16 by wearing NOTHING but my tasty bday-suit! Mmm; Yummy! ;-)”