Crystal Harris Tears Up Over Engagement 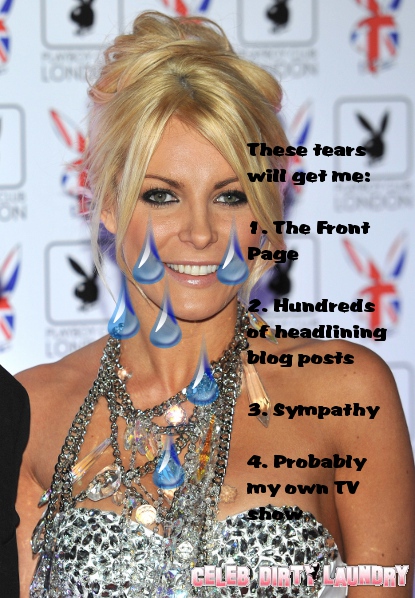 Okay, Crystal Harris, it’s time for you to go away now. For those of you who are just getting caught up with this ridiculous situation and would like to hear why I’m feeling so angst ridden, it’s because the wedding between Crystal and Hugh Hefner was called off recently on the basis of her wanting to do so . . . and now she’s forcing out please-feel-bad-for-me-so-I-can-stay-in-the-limelight-longer tears.

In a recent interview with Entertainment Tonight, the actress unleashed her tears and had this to say:

“It happened so fast. Hef asked me to marry him in front of three cameras and a photographer. I thought it was something I wanted.”

I think what you thought you wanted was his money, not his old body. The truth of the matter is is that you didn’t have to string this event out for so long . You could have ended it much sooner, and you might have even been able to spare Hef’s withering little heart in the process.

Perhaps the biggest problem with this situation — and the reason why people are getting so worked up about it — is that now everyone’s beginning to think it’s all just a publicity stunt to garner attention for her music career and whatever else she might have planned for the future.

Hey, Hef, I think it’s time we hear a few words from you!

And now back to the tears: fake or real? You tell us!