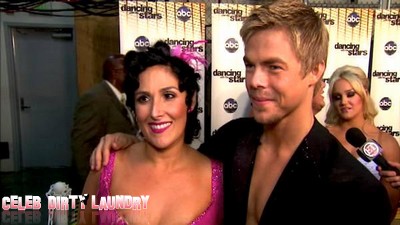 Enjoy tonight’s Ricki Lake’s Samba & Argentine Tango Performance Videos. On tonight’s ninth episode and the semi-finals of Dancing With The Stars couples will have to impress the audiences with three routines.  The competition is nothing short of intense tonight, with everyone wanting to get into the finals.  If you missed tonight’s show you can read our official recap here!  If you missed her performance last week you can watch the video here!

The dances Ricki Lake and professional dancer Derek Hough will be performing are the Samba to I Go to Rio by Peter Allen, Argentine Tango and Cha-Cha.  Ricki has been suffering from sharp chest pains for more than a week as a result of an inflamed nerve, something her doctor says suggested she take two weeks off to recover from.  Although Ricki claims she is a workhorse, the three new dances could be difficult for her.

Ricki is a frontrunner in the competition and she recently said she cannot believe she has made it so far. She said, “It’s become less about winning and more about, ‘Wow! I can’t believe I’m still here!‘   If you want to vote for Ricki her voting number is 1-800-868-3411.

Ricki Lake’s Samba Judges Comments –  Len said: Straight into the dance, fabulous, fabulous, Fabulous. You just took a giant step into the finals! Bruno said: Bright and brilliant from beginning to end. I am dazzled. Carrie Ann said: I saw you working your shoulders. It made all the difference that was what shows technique. A fabulous dance!

Ricki Lake’s Argentine Tango – Judges Comments Len said: Lovely contrast of movement, lovely dance, I don’t think you know how good that was because it was really really good. Bruno said: Spot on, dancing fabulous. Carrie Ann said: What I see in you is the core strength improving. You always had the fashion but now you have the pop!

Check out the video below and let us know what you think?  Do you think she will be eliminated tonight?  Sound out in the comments below!