BY Robyn Good on May 2, 2011 | Comments: 3 comments
Related : Dancing With the stars, Dancing With The Stars Season 12 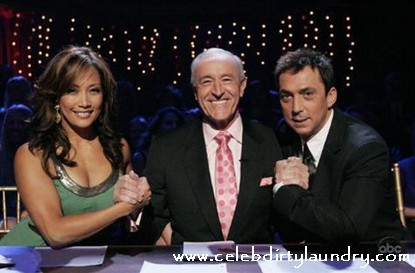 Last week on Dancing With The Stars Chris Jericho got rocked right out of the competition.  Now get ready for a week of greatness and three ballroom legends join us and we honor these dancers.   It is time to shine because in a competition this close one bad dance means you go home.  The dancers will also dance as teams tonight.

Len thought they did a terrific job,  Bruno liked it, he appreciated the fact that they went full throttle but because they did they went out of formation a bit.  Carrie Ann disagrees and thought Ralph held his own with the youngsters.  Guest judge Donnie Burns thought they did a great job.

Bruno thought the passes were good and they were good.  Carrie Ann though that Kirstie was a bit behind but in the solo great.  Overall good.  Donnie though the spacing between the couple was not quiet right.  Len said he knows what team of girls Won the boobie award.  He thought Kirstie was right on.

First up with the individual dance tonight Chelsea Kane and Professional Dancer, Mark Ballas are going to dance the Paso Doble.  Len said, he gets confused but at his age it is understandable.  He got confused over the dance, there was too much aggression.  Bruno said, felt it was like a Quintin Tarantino Paso Doble and he thought it was outstanding.  Carrie Ann said, out with the old in with the new she loved it.  Donnie said, last week he thought she did the best number.  But he feels a little like Len and he was a little confused.  It was a little too aggressive.  Scores: Donnie – 8, Carrie Ann – 9, Len -8, Bruno – 9 =  Total – 34 + 30 from the team dance = 64

Kendra Wilkinson and Professional Dance Partner, Louis Van Amstel dancing the Tango. Bruno said, she is still sexy but she was hangin onto Louis a little too much.  Carrie Ann said, she is so proud of Kendra it was elegant, she had a little hiccup but she recovered.  Donnie said, he watched her last week break off the shackles and this week it was much more difficult and she did a good job. Len said, he agrees she coped very well.  He would like it a tad more crisp and she clinged on Louis a bit too much.  Scores: Donnie – 8, Carrie Ann – 8, Len -7, Bruno – 8 =  Total – 31 + 30 from the team dance = 61

Kirstie Alley and Professional Dance Partner, Maks Chmerkovskiy dancing the Jive.  Carrie Ann said,  she just loves her so much but there was not enough of the jive.  She said Kirstie looks amazing.  Donnie said, I really liked it, I buy it.  He thinks she was great.  Len said, it was fun, high energy and playful.  However as a jive it was uneventful.  Bruno said,  you might have gone wrong but as an entertainer it was superb.  He felt she gave it and it was enjoyable.  Her musicality and her instinct is always on the money all the time.  Scores: Donnie – 9, Carrie Ann – 7, Len -6, Bruno – 8 =  Total – 30 + 30 from the team dance = 60

Ralph Macchio and Professional Dance Partner, Karina Smirnoff dancing the Quick Step.  Donnie said,  you started off vertical and finished horizontally so it had to be good.  Your foot work was fabulous.  He thought they rocked.  Len said, he liked the energy and he loved the energy, his upper body is a little bit loose but overall a great job.  Bruno said, it was more than a quick step, he thought that he got it.  He thinks he is a great performer and did really really good.  Carrie Ann said, you’re back.  You had some rough weeks this is the way to do it.  Great job!  Scores: Donnie – 10, Carrie Ann – 9, Len -8, Bruno – 9 =  Total – 36 + 30 from the team dance = 66

Hines Ward and Professional Dancer, Kym Johnson dancing the Tango.  Len said, it was a mixture for him some of it he felt he was like a tiger and then it went into a fairy mode – too dainty for him.  Overall he liked it very much.  Bruno said, he liked the way he played it, big strong and masterful and managed to retain the stealth.  He felt it was a killer tango.  Carrie Ann said, what he does that is so unique is he takes command of every dance.  Tonight though he was a little off balance.  Donnie said, he thinks he dances from his heart and uses his head and he has a nice personality however, he felt his arms were a little flying.  But overall he did a great job.  Scores: Donnie – 9, Carrie Ann – 9, Len -8, Bruno – 10 =  Total – 36 + 30 from the team dance = 66

Romeo and Professional Dancer, Chelsie Hightower dancing the Samba.  Bruno said, he can definitely get down and shake it.  One thing he has to get the bounce in his knees right.  Carrie Ann said, there was a lot of bounce going on.  She thinks he has incredible potential but he has to work on getting the right type of bounce.  Donnie said, feels he has achieved grace and elegance but he he may have a party in his pants but he has an earthquake in his feet.  Len said, he did not like it, he talked the talk but did not dance the dance.  He feels he has to up his game.  Scores: Donnie – 7, Carrie Ann – 8, Len -7, Bruno – 8 =  Total – 30 + 30 from the team dance = 60