BY Robyn Good on April 4, 2011 | Comments: Leave Comments
Related : Dancing With the stars, Dancing With The Stars Season 12 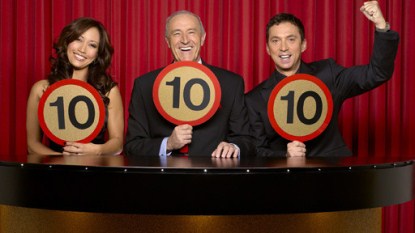 Last week not much love was shown for Mike Catherwood and his professional dance partner, Lacey Schwimmer and they went home. Tonight each dancer was challenged to tell a personal story of their life. There will be love, loss and strife tonight on the dance floor tonight. There will be new dances tonight that we have not seen the dancer’s attempt this season.

First up tonight the women who was near the bottom of the leaderboard last week  Wendy Williams and Professional Dancer, Tony Dovolani.  Wendy is going to bring how she got started in media which was radio.   This is where she learnt who she was as a person. They are dancing the foxtrot to Last Night a DJ saved my life. Len, said to express emotion through dance is very, very difficult. He knows she worked hard but he thought the dance was a struggle. It just wasn’t great!  Bruno, said it was like watching the statue of liberty and he has to agree with Len. She really has to deliver though the body, not just the face. Carrie Ann said she respects a women who follows her dreams but feels she took a step backwards this week.  Scores: Carrie Ann, 5 Len, 5 Bruno, 5 Total = 15.

Chelsea Kane and Professional Dancer, Mark Ballas are going to dance the Cha Cha and the dance is going to tell her love story with her first love and the song she will dance to is Chelsea a song that was written for her. Len, said he remembers his first love and did not look like that. But he said that was her best dance and well done!  Bruno, said she was sexy and he could feel the excitement of the delicious first taste of love and a great Cha Cha. Carrie Ann, said she was a big fan of her Cha Cha. She thought she was adorable.  Scores: Carrie Ann, 7 Len, 8 Bruno, 8 Total = 23.

Chris Jericho and Professional Dance Partner, Cheryl Burke are going to dance the Rhumba and the song he is going to dance to is Let It Be and he is dancing for his mother who he misses. Len, said he thought it lost fluidity but the lines and poses were excellent and the dance was tough but he did an excellent job. Bruno, said he thought it brought a vulnerability. But it did not flow as well as it should have.  Carrie Ann, she said it was a beautiful tribute to his Mom. She said his trip action was a little strange but still great job. Scores: Carrie Ann, 7 Len, 7 Bruno, 7 Total = 21.

Kendra Wilkinson and Professional Dance Partner, Louis Van Amstel dancing the Rhumba to the song You and me. The story she is going to tell is how she met her husband Hank and the adversity they faced when they first started dating. Len, he said he did not know what to make of the unnecessary gyrating. What interests him is that she came out with beautiful feet and good leg action. Bruno, said it was teasingly erotic and it was hot. He said she did a very very good job. Carrie Ann, said that was hot, hot, hot. The leg and hip action were good.  Scores:  Carrie Ann, 8 Len, 7 Bruno, 8 Total = 23.

Romeo and Professional Dancer, Chelsie Hightower is dancing the Rhumba to the song I’ll be there. He is dancing the song for his cousin that he lost. Len, said he felt there is a huge step backwards. Bruno, said he really put his heart and soul into it. Sometimes his feet went a bit astray. Carrie Ann, said there was a little bit of funky footwork. But he really committed to the dance.  Scores: Carrie Ann, 7 Len, 6 Bruno, 6 Total = 20.

Hines Ward and Professional Dancer, Kym Johnson are dancing the Samba to the song Fantasy. He is dancing the song for his Mom who wanted him to have a better life than she did.  She is the heart and soul of who he is. Len, said he was proud of him.  Bruno, said it was bouncing butts, two for one, happy hour – guess he liked it! Carrie Ann said he danced the Samba like he’s been dancing it his whole life.  Scores: Carrie Ann, 9 Len, 8 Bruno, 8 Total = 25.

Petra Nemcova and Professional Dancer, Dmitry Chaplin dancing the Waltz to the song You raise me up. The song gave her the courage to start a foundation called the Happy Hearts foundations. Len, said it had grace, it had elegance. This is his favourite of the season. Bruno, said she was like a vision from heaven and she danced like and angel. Carrie Ann, said what makes her so good was her heart was showing.   Scores: Carrie Ann, 8 Len, 9 Bruno, 8  Total = 25.

Sugar Ray Leonard and Professional Dance Partner, Anna Trebunskaya dancing the Paso Doble to My Prerogative. The dance is all about beating the odds because the odds were heavy against him when he was a fighter. Len, said tonight he come out stronger and fought back. Well done!   Bruno, said the raging bull fighting got him back in business. Carrie Ann, said she thinks she saw a lot of improvement. It was a great performance.   Scores: Carrie Ann, 7 Len, 6 Bruno, 7 Total = 20.

Kirstie Alley and Professional Dance Partner, Maks Chmerkovskiy dancing the Rhumba and she is dancing to Somewhere over the Rainbow. Her song depicts the hopefulness after despair. When they started the dance Maks thigh gave out and he dropped Kirstie but they got up and continued.   Len, said they overcame the adversity. He liked it. Bruno, said it proves you can’t keep good talent down. Carrie Ann, said sometimes tradegy leads to a magical moment and you both were so connected to the music. Scores: Carrie Ann, 7 Len, 7 Bruno, 7  Total = 21.

Ralph Macchio and Professional Dance Partner, Karina Smirnoff dancing the Rhumba to the song Stay Gold. The song was his wedding song and this week is his 24th wedding anniversary. He is dedicating the song to his wife.  Len, said the whole routine was great and clear but it needs a tad of refinement.  Bruno, said it was a very beautiful dance but he needs to improved the execution.   Carrie Ann,  said it was a very sweet rhumba.  She feels he has to work on his core strength.   Scores: Carrie Ann, 7 Len, 7 Bruno, 7  Total = 21.

Come back tomorrow to find out who gets eliminated!