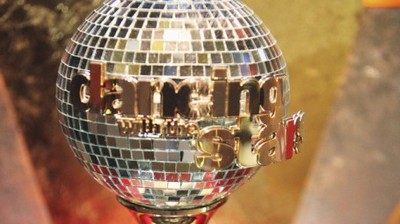 Tonight is the fifth episode of Dancing With The Stars and it’s Eighties Week and the eight remaining couples will dance to hits from the eighties.   We are at the half way point in the season and no one has really pulled ahead of the crowd yet.  Last week in a shocking elimination Chynna Phillips and Professional Dancer Tony Dovolani were eliminated.   If you missed the show last week catch our official recap here!    If you missed the results show last week catch our official recap here!

Opening the show tonight is Hope Solis and Professional Dancer Maksim Chmerkovskiy dancing the Tango to Bon Joni’s Livin’ On a Prayer.

Len said:  Max listen you did a good job, Tango is about action and reaction.  Hope was too willowy there was no strength in her.  It was too loose limb.  I liked the aggression and attack.  Bruno said:  I thought you got the 80’s super bitch down a tee.  You were strong, sexy and powerful.  Carrie Ann said:  I agree with both Len and Bruno some of your lines got a bit awkward.  You’re so strong sometimes you have to learn less is more.  You can be at the top of the leader board if you work on it.  Scores: Carrie Ann –8, Len -8, Bruno – 8  TOTAL = 24

Carson Kressley and Professional Dancer Anna Trebunskaya dancing the Jive to Wham’s Wake Me Up Before You Go Go.

Bruno said: Carson that was loopier than a Looney tunes.  This was a crowning achievement in madness.  Carrie Ann said:  It was definitely fun.  Richard Summons was envying your outfit.  It is week 5 and I did not see much technique.  Len said: Carson I like you, you know I like you if I was judging with my heart you would be back next week.  But I am not and I am not sure that was good enough.  Scores: Carrie Ann –6, Len -6, Bruno – 7  TOTAL = 19

Carrie Ann said:  I wanna see real passion when you are dancing, it is a little on the drab side to me.  Len said:  I thought it was simple but it was effective.  There was an ease and an elegance about it and a few unstable moments.  But overall good.  Bruno said:  You did it exactly right tonight.  It was sexy and not flirty.  For me one of your best performances.  Scores: Carrie Ann –7, Len -7, Bruno – 8  TOTAL = 22

Len said:  Way to go Jose I will tell you what, I did not think you would perform like that.   In the future I will tell people to look at you to learn how to dance the Samba.  Bruno said:  You were like a sex machine.  You have so much fire down below it was like a volcano.  Brilliant.  Carrie said:   I want more of that, that was amazing, you are one fire, that is the way to dance the Samba.  Scores: Carrie Ann –9, Len -9, Bruno – 10  TOTAL = 28

Bruno said: Well, well we start to see Rob the heartthrob.  For the first time I start to see you use Cheryl as a partner.  A great performance.  Carrie Ann said:  I said from the beginning I saw potential in you, that was strong and sexy.  You were totally in control.  Len said: Let me tell you this dance for guys is very hard but you pulled it off.  You looked good, you took command and you were working it.  Scores: Carrie Ann –9, Len -8, Bruno – 8  TOTAL = 25

Chaz Bono and Professional Dancer Lacey Schwimmer dancing the Samba to Kool and The Gang’s Get Down on It.

Len said: Daivd I know I am the old fuddy duddy but I have to tell you it had a great 80’s feel.  We are at the 1/2 way stage.  You have to show up or shut up.  You showed up and it was fantastic.  Bruno said:  Tango with a rebel yell.  That is the way to go!  Carrie Ann said:  It was fun, it is improving tremendously over the week.  You have to work on your musicality everything else is there.  I see you as a contender.  Scores: Carrie Ann –8, Len -9, Bruno – 8  TOTAL = 25

Bruno said: Some places were good but you went off timing and you did not gel.  Carrie Ann said:  I agree you were way off.   But when you two dance what I love is how you work as a team. Len said:  No one likes funk like I do, I was a funkateer.  But, it is not a move I appreciate in the foxtrot.  The footwork was a little hit and miss.  It was not your best dance but not your best.   Scores: Carrie Ann –8, Len -8, Bruno – 8  TOTAL = 24