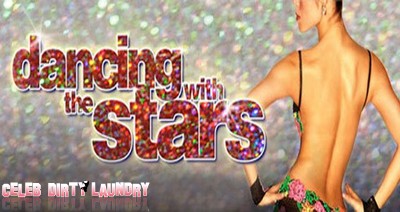 Dancing with The Stars Semi-Finals have arrived and the competition is intense.  Last week we saw Nancy Grace and her partner Tristan MacManus given the boot.  Nancy landed at the bottom of the leaderboard after her Tango only received 24 points, while their jive – which included a performance-ending cartwheel – only scored 20 points.  If you missed her performances they are here and here.   If you missed the result show you can read our official recap here!

This week the four remaining couples will perform three routines, making it even more difficult for the couples.  Their first performance is an Argentine Tango, their second dance is either a Paso Doble or Samba one of which is a style dance they have not yet performed and their third dance will be the Cha Cha relay, in which all couples will dance to the same song.  Each couple is going to dance for 35 or 40 seconds, then leave so another couple can come onto the floor.

Maks wrote on his blog about the extra dance: It’s a shock to not just the celebrities, but the pros too. At this stage of the game, we’re all exhausted. This is when our bodies start shutting down and we get sick, so to have three dances, it’s very, very tough. I know they want more content because they want a longer broadcast, but this is the last thing any of us needs. You would have a better show if it was shorter with few dances. It’s about quality, not quantity, right?

With three dances tonight it is going to make the competition intense.   Do you agree with Maks, it the addition of the extra dance going to cut down on the quality?  Sound out in the comments below!

Stay tuned with us as we cover the show with up-to-the-minute details tonight starting at 8PM to find out what happens!