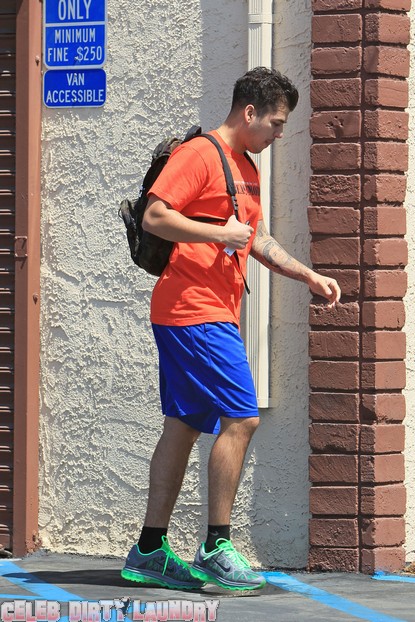 They will be competing against each other during their dancing days on Dancing With The Stars, but that doesn’t mean that David Arquette doesn’t admire the view of Rob Kardashian’s backside.

During a taping of the Late Show with David Letterman, David commented that Rob’s butt is “fantastic”.

He told Dave, “The thing about Rob is, and a lot of people don’t know this, but he’s got a great ass just like his sister. I’m serious! Once you see it, his ass is fantastic. And I really think it’s going to be a secret weapon.”

I wouldn’t call Kim’s butt “fantastic”, by any stretch of the imagination. Words like, “fake”, “padded” and “cottage cheesy” come to mind. Sorry if I made you upchuck your lunch right there. But for the sake of argument, I found the above photo of Rob leaving dance rehearsals for the show, just to see what he’s got going on back there. What do you think? Is David right? Or will you need more “evidence” to decide?

If you’re wondering how David dances, he gave us some insight. He said, “When I dance, I look like I’m being electrocuted. Apparently there’s no real room for that in ballroom dancing.”

Too funny. Who are you rooting for this season?