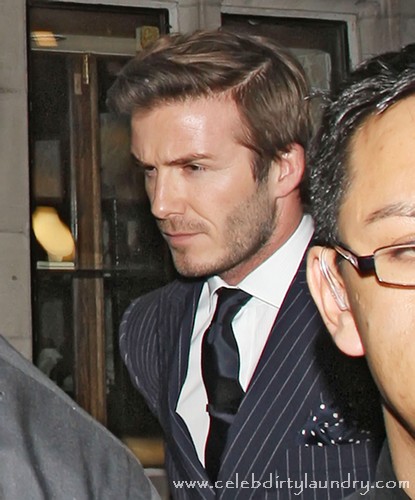 The legal battle stems from an article in ‘In Touch Weekly’ in which prostitute Irma Nici, 26, alleged that she had a series of sex romps with David Beckham, dad-of-three and husband of Posh Spice Victoria, for $10,000 cash in London and New York in 2007.

In a hearing on February 14, Judge Manuel Real dismissed Beckham’s lawsuit against the publisher of ‘InTouch,’  Bauer Publishing, which led Bauer to seek to recoup costs associated with the legal battle.  The L.A. Galaxy player filed an objection to the proposed order dismissing his lawsuit.

There is also disagreement over the reason for the court’s dismissal of Beckham’s claim for intentional infliction of emotional distress, which was because it ruled that Beckham could not demonstrate with clear and convincing evidence that Bauer acted with actual malice.

Beckham is now claiming that the court directed Bauer to “prepare a ruling,” but instead the publishing house’s lawyers revised it and added several assertions that the court didn’t make.  His legal team is proposing that the court reject Bauer’s proposed order because it does not accurately reflect the ruling made by the court.

The court’s ruling did not discuss Bauer’s erroneous argument that the California Uniform Single Publication Act barred the claim, according to the sports star’s lawyers.

Meanwhile back home, Victoria, is expecting their fourth child.