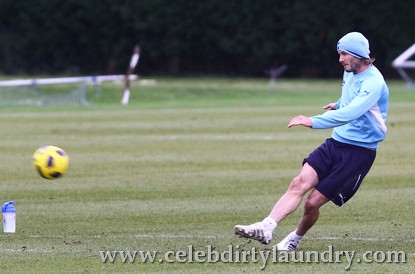 David Beckham will captain Los Angeles Galaxy for the first time in three years when the Major League Soccer side face Real Salt Lake on Saturday.   The ex-England skipper, 35, took the role upon joining in 2007 but in recent years Landon Donovan – currently on international duty – has been captain.

Donovan questioned Beckham’s commitment to the club was by in 2009, while Galaxy fans booed Beckham for a period.   “I’ll be proud to wear it,” said Beckham of the captain’s armband.   “It doesn’t change the way I play.  It’s something you’re very proud to wear, but you need more than one leader on the field.”

Beckham relinquished the role to Donovan when he joined AC Milan on loan in 2009, missing the start of the MLS season in the process.  Galaxy manager Arena said the decision to turn back to Beckham, albeit on a one-off basis, was simple.

“He’s a logical choice,” he said.   “He’s worn the captain’s armband here before and probably in a couple of other places as well.  I don’t think it’s asking too much.  It’s not too overwhelming for him.”

Former Manchester United and Real Madrid star Beckham played all 90 minutes as Galaxy beat Seattle Sounders 1-0 in their opening MLS match of the season on 15 March as Juninho scored the winner.   Beckham and Donovan, who is preparing for the United States’ friendly against Argentina in New Jersey on Saturday, soon patched up their differences after their exchange of opinions.