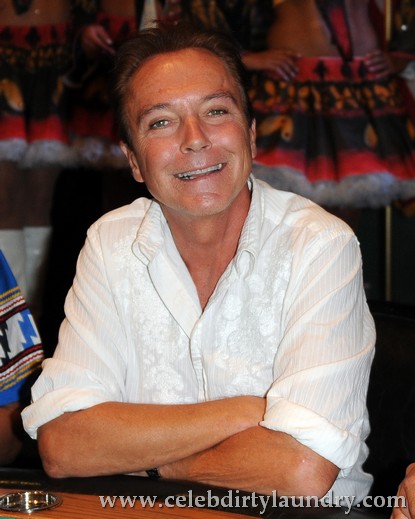 Forty years ago, a 21-year-old David Cassidy snuck into Italy, with the sole intent of travelling around Europe incognito. He’d just become famous in the States thanks to his role in TV series The Partridge Family, where he played Keith — the eldest son in a fatherless group of musicians who toured America in their psychedelic van — but was as yet unknown throughout most of Europe.

He went sightseeing unrecognised in Rome, Florence and Paris before heading for his final destination, London.

‘All I had were my skis, my guitar and my suitcase,’ he says. ‘It was wonderful because no one knew me and I was living like a gypsy.’    ‘Then I flew into Heathrow thinking no one would have heard of me, but then this giant roar came up from thousands of kids who were waiting for me.  The Partridge Family was showing in the UK, and it turned out I had a big following.’  ‘Police had to escort me everywhere and in the end I was politely asked to leave my hotel because the fans kept singing my songs outside, disturbing the other guests.’

Then the BBC complained because the fans swamped the studios when I performed. It was, he says, grinning happily, ‘complete madness.’

It was Cassidy’s first taste of Britain and it’s still the place that holds some of his fondest memories.  To that end, he’s giving a special concert at London’s Hammersmith Apollo on April 12 — his 61st birthday — ‘because it’s only appropriate I give back to the British people after all they’ve given me,’ he says.  ‘I don’t really want to tour any more, but I did want to do something special to mark the 40th anniversary of my first visit to Britain.’

Cassidy’s relationship with his fans has evolved from the screaming hysteria of the Seventies (‘fans tried to take a piece of me home with them and stick it on their wall’) to the less hormonal yet still intense adoration that greets him today.

He was Justin Bieber before Justin was even a twinkle in Pa Bieber’s eye and even though his admirers are now of a certain age, he still has a huge following.  While others might have resented the continued attention, Cassidy remains remarkably stoic.

‘The fans now are different from before.  I have stalkers, and some are old ones and some are new.  Some people just don’t get reality: that this is my job and something I love to do.’

‘We only discovered her when she took a walk outside in the middle of the night and started screaming when someone tried to abduct her.  I paid for her flight back to Belgium, asking her never to return.’ Cassidy shudders. ‘I mean, that air conditioning looked onto my bathroom, so she was probably watching me the entire time.  I can’t bear to think about it.’

As he acknowledges, only a handful of people have ever experienced the noxious levels of fame that he encountered and unlike peers such as Michael Jackson and John Lennon, he survived — though at a price.  Drugs, drink, near-bankruptcy, breakdowns and marital discord have all played a part in his life, yet despite everything he appears to have come through with his humour, marbles and looks largely intact.

He’s impressively trim, resolutely youthful-looking (he admits to dyeing his hair, ‘as I was silver by my mid-30s’) and claims to be free of cosmetic surgery aside from an operation decades ago to remove fat from under his eyes.

The Partridge Family ran for four years, spawning hit singles such as I Think I Love You and Come On Get Happy and creating total Cassidy mania, with lovelorn teens snapping up David Cassidy lunchboxes, pillowcases and bubblegum.

Cassidy, just another young actor trying to make it in Hollywood, was suddenly a superstar — his concerts smashing box office figures and causing levels of hysteria and even rioting rarely seen before or since.

‘But at the height of that fame, I was definitely the most isolated I’ve ever been,’ he says. ‘I’d be working seven days a week for most of the year and it never let up.  When I got home, I isolated myself, just so I could rest.  And because I couldn’t go to the bank or shop like normal people, I had a housekeeper who took care of everything.

‘That creates a certain immaturity and even though I was 24 by the time the series ended, I was about 19 emotionally.  I hadn’t lived; I’d devoted myself to the business of David Cassidy, rather than the person.’ Added to this was the obvious difference between Cassidy and his on-screen alter ego, Keith Partridge.  While Keith was sweet and wholesome, David was experimenting with everything from LSD to heroin and getting through assorted women at a phenomenal rate.

‘I was way different to my character, and the fans had no idea?.?.?.’ he grins. ‘I wasn’t ever a bad guy and I was never arrested or anything like that, but I was a wild boy in many respects.  Also, I felt very conflicted about who I really was and who I was portrayed to be and that does terrible things to your head.’

After 14-year-old fan Bernadette Whelan died following being crushed at one of his concerts at London’s White City, Cassidy, distraught and exhausted, retired from the stage in 1974 at the peak of his fame.  With his recent appearance in Celebrity Apprentice alongside Donald Trump in the U.S., he’s managing to keep himself in the public eye.

He was married twice before Sue — his first marriage, to actress Kay Lenz, lasted four years; his second, to horse breeder Meryl Tanz, two  — but though he once admitted that successful relationships eluded him, his third marriage reaches its 25th anniversary next year.  The couple had enjoyed a brief fling during Cassidy’s heyday and got back together during the mid-Eighties, after which they never separated.

The secret to a long marriage?  You have to find someone you respect and someone you can climb a mountain with and you also have to accept that there are going to be parts of that person you may not like, but you still love them.  And no, I won’t tell you what they are because it’ll haunt me for ever!

‘I tell you what, though — I’ve enjoyed long relationships with females who are friends and I’ve had lots of meaningless flings, too, but I will never understand women,’ he says, shaking his head.

One woman he at least partially understands is his 24-year-old daughter Katie, from a brief relationship he had with model Sherry Williams.  Currently starring in the TV series Gossip Girl, Katie had little contact with her father growing up, though the two are now close, ‘and I’m so proud of her,’ says Cassidy.

‘When she was 15, her mother got her a recording deal because she was my daughter — and I went insane. This was when Britney Spears was at her peak and every teenage girl wanted to be Britney, but I said to Katie: “Don’t do this – you’re going to regret it.”

‘We had many conversations about it and she’s thanked me for it since.  Now, she’s doing something she really loves to do and she’s worked hard for it.  It’s never about the fame and money — it’s about doing the work.’  So, what then of all the fans who can’t quite get used to the fact that their idol is now in his seventh decade — the feather cut replaced by a sensible hairdo, the cheesecloth having given way to golf shirts.

‘Well, it was funny because I was at some event in the late Seventies just after I’d got married and I’d gained about 10lb. Some woman walked by and said “What happened to you? You’re so fat!” and I promise you, she didn’t even have any teeth!  ‘I just smiled and said “Yes, we all eventually have to weigh more than 119lb”, and moved on.  But generally people are very kind and I don’t ever get that feeling that I’m disappointing them when they see me.  They accept that I’m a father and they accept that I’m a grown-up now,’ he says, adding with a twinkle, ‘well, I almost am.’