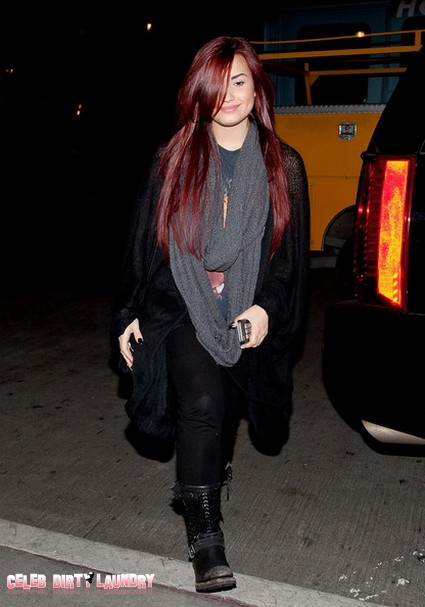 Demi Lovato had a little damper on her Christmas spirit last night. The “Skyscraper” singer was furious with her former employer The Disney Channel after two of their current shows “Shake It Up” and “So Random” used jokes about eating disorders. According to People magazine, a character on “Shake it Up” joked that “I could just eat you up, well if I ate.”

19-year-old Lovato, who has been very candid about her former struggles with her weight and food, took to twitter to call Disney out. In three consecutive tweets, she said:

“And is it just me or are the actress’ [on Disney Channel] getting THINNER AND THINNER…. I miss the days of RAVEN, and LIZZIE MCGUIRE…”

“Dear Disney Channel, EATING DISORDERS ARE NOT SOMETHING TO JOKE ABOUT.”

Apparently, Disney Channel realized the error of their ways—or the problem of being slammed to over 5,000,000 Lovato Fans— and decided to pull both episodes that featured the eating disorder jokes. The network took to their PR twitter account to do damage control: “We hear you & are pulling both episodes as quickly as possible & reevaluating them … It’s NEVER our intention to make light of eating disorders!”

Lovato’s show “Sunny With A Chance” and her movies “Camp Rock” and “Camp Rock 2: The Final Jam” made the popular kids network big bucks from 2008-2010. The “Skyscraper” singer entered treatment for “emotional and physical issues” in October 2010 after leaving the network. She appears to be doing well.