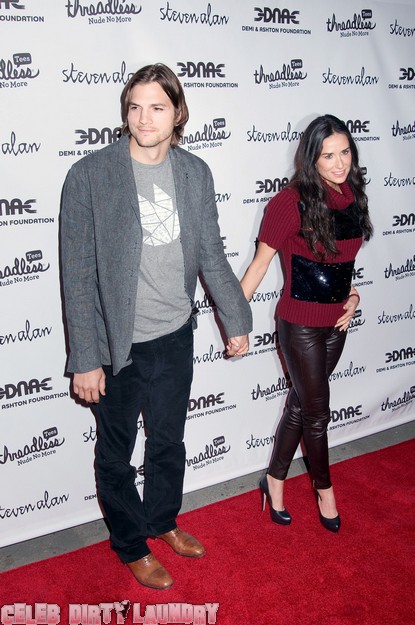 New reports are making the rounds that Ashton Kutcher is still a Cheater McCheaterson and has banged some “strange”. Reportedly, the goofy Two And A Half Men actor was hooking up with a chick named Sara Leal, after telling her that he and wife Demi Moore were separated.

Now, we’ve heard that Star magazine is running a new story on the famous couple, saying that they’re going through a $290 million divorce!

Nik, I’m going to be straight to the point. I’m a female who works at who happens to be friends with Sara Leal, probably not after this. I’m sick to my stomach over what happen last Friday night. Like most people on earth I worshiped Ashton Kutcher and Demi Moore until Ashton Kutcher f*cked my friend Sara Leal at 4:30AM technically Saturday morning in his room on the 12 floor at the Hardrock Hotel in San Diego. Ashton Kutcher told Sara Leal that him and Demi Moore are separated and the public doesn’t know yet. Smooth line Ashton, she was going to f*ck you anyway. Nik if you want to verify any of this just call Sara Leal yourself or ask Deena Omari. Better yet subpoena Ashton’s bodyguard who took her phone before she came into the room.

And with that, the new rumors that the couple are officially ending their marriage. Watch out for the new Star issue to come out tomorrow and see for yourself. We can only hope for Demi’s sake that the rumors aren’t true, but we don’t expect her to stay with a cheater.

Stay tuned as more details of this story are revealed!