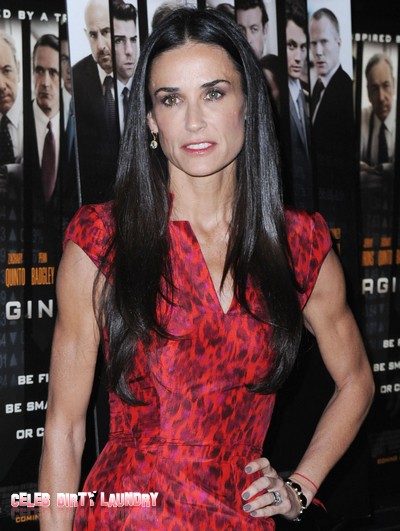 You can’t teach an old cougar new tricks – and Demi Moore is out to prove that by striking up a relationship with the much younger Scott-Vincent Borba. You would think that being burned by 33-year-old Ashton would have taught her a lesson but no sooner did 49-year-old Demi file for divorce from the cheating dog then she started dating Scott-Vincent who is also in his mid-30s.

RadarOnline scooped the news: “Demi and Scott-Vincent started dating last week,” a source close to the couple revealed to RadarOnline.com.  “They have known each other a long time and he’s really been there for her by her side through the whole Ashton thing.  It’s easy for Scott-Vincent to keep his relationships a secret because he’s so often photographed hanging out with celebrity clientele,” the source said.  But he’s head over heels for Demi and there’s definitely potential for a lasting relationship between them.”

Scott-Vincent is the founder and CEO of BORBA skin care products which are endorsed by many Hollywood celebs including Ashley Greene, Mila Kunis, Stacy Keibler and AnnaLynne McCord. Perhaps Scott-Vincent is looking to extend his treatments to middle-aged women?

Before he was the boss of Borba skin care products, Scott-Vincent worked as a Ford model and participated in major fashion campaigns and runway shows including Calvin Klein and Versace. He earned his B.S. degree from Santa Clara University and is a licensed Esthetician.