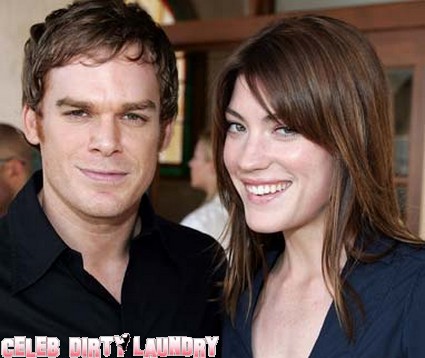 Michael C. Hall and Jennifer Carpenter are divorcing and the bitter fallout is threatening to ruin the sixth season of Dexter.  The former couple, who married in 2008 and split last year, are barely speaking to one another as they film the sixth season of the show that makes us love a serial killer.

Michael brilliantly plays the lead role and title character of Dexter, a blood-spatter forensic analyst with Miami Police and the Jennifer plays a detective in the department and his equally talented sister, Deb.  They announced they were divorcing in December.

‘They talk as little as possible while they are filming scenes together and then avoid each other like the plague the rest of the time,’ says an inside source.

Jennifer stood by Michael while he battled and recovered from Hodgkin’s lymphoma in 2009 but couldn’t get over his refusal to start a family.

‘They have a ton of unresolved issues over their marriage, but they have nothing to say to each other at this point,’ continued the source.

‘It seems as if Jennifer hasn’t forgiven Michael and she’s not making life on the set for him easy.’

‘The caring sibling relationship viewers see on the screen is diametrically opposed to the bitter atmosphere between the former lovers when the cameras aren’t rolling,’ added the source.  ‘It’s incredibly awkward for everyone.’

What’s interesting is to see whether we in the audience will be able to see the difference in their performance. Are they good enough actors to mask their true feelings?