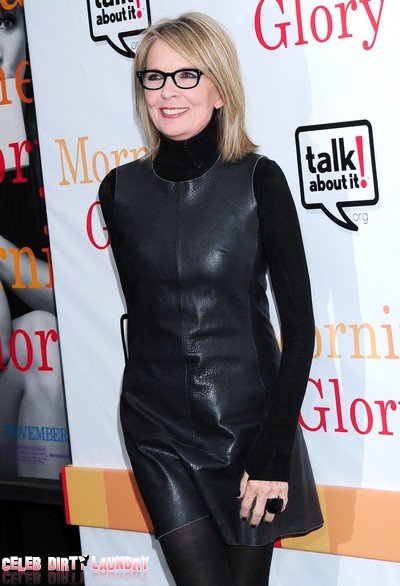 Diane Keaton claims that she saw her boyfriend, Woody Allen, as “as a cockroach you couldn’t kill” and that resulted in her spending 5 years as a bulimic. Diane admits that bulimia “outshone” her “desire” for Allen. No kidding – Allen is the ugliest man alive and always relied exclusively upon his fame and power in the film industry to get women to tolerate him.

Diane has admitted that she spent the five years she was with Allen in the early 70s gorging on food then making herself vomit.

Writing in her new book ‘Then Again: A Memoir’, she said: “The demands of bulimia outshone the power of my desire for Woody. Pathetic, but true.”

Diane’s problems started when she was ordered to lose 10 pounds for a part in the original Broadway production of ‘Hair’ in 1968.

She claims she didn’t think her condition was called bulimia, but “It was just this trick you could do. It’s a horrible problem. Ugly and awful.”

In the book, Diane, now 65, describes how for breakfast, she’d have a dozen buttered corn muffins, three fried eggs with bacon, pancakes and four glasses of chocolate milk.

For dinner she would eat much more, listing a bucket of Kentucky Fried Chicken, several orders of fries with blue cheese dip and ketchup, TV dinners, chocolate-covered almonds, a large bottle of fizzy drink, a pound of peanut brittle, M&Ms, mango juice, a Sara Lee pound cake, and three frozen banana-cream pies, all of which she would vomit up afterward.

Woody never suspected anything was wrong with Diane, although at one point, seeing how insecure she appeared, he sent her to see a psychoanalyst, whom she saw daily for 18 months. At 25, she suddenly began eating normally again.

In her memoir, Diane also told how she and Woody – who split in 1975, but remained friends with him casting her in his film ‘Annie Hall’ in 1977 – constantly insulted each other, but found it “hilarious.”

She wrote: “We shared a love of torturing each other with our failures. He could sling out the insults, and so could I. His insights into my character were dead-on and – duh! – hilarious. I had him pegged as a cockroach you couldn’t kill.”

No doubt that Mia Farrow also thinks Allen is a roach.