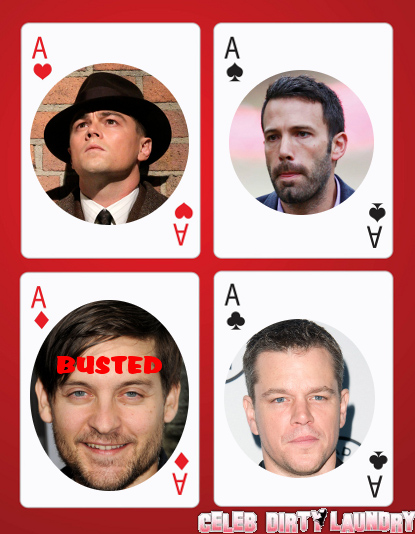 Tobey Maguire is getting sued for allegedly (Ah, that word makes me want to scream!) playing unlicensed poker. While he’s the only celeb getting sued for indulging in a few rounds of poker with a ponzi scheme criminal, the world is now learning that other actors often time partook in high stakes games of Texas Hold ‘Em where it wasn’t unusual to see tens of thousands of dollars exchange hands.

Who might these other actors be you might ask? Well, none other than Hollywood’s 3 primary action-star-badasses: Ben Affleck, Matt Damon, and Leo DiCaprio.

TMZ recently learned that some of these games were played in the Hollywood home of Rick Salomon, the male lead in Paris Hilton’s sex tape.

Maguire is currently being sued by the board of trustees in the bankruptcy case involving Brad Ruderman, who has been deemed a ponzi scheme criminal. Ruderman, who supposedly played a few rounds of poker with Tobey, allegedly lost $300,000 dollars. The trustees feel that the game was illegal and are now suing Tobey for the amount of his winnings.

Oh, Hollywood. I guess when you’ve got boatloads of cash even a deck of 52 cards can get you in trouble. . .