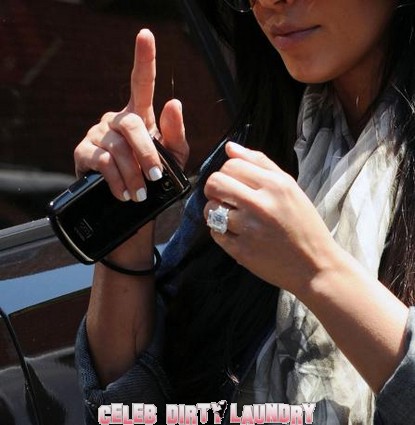 Kim Kardashian is going to marry her fiancee, Kris Humphries, on Saturday, August 20th in a much fussed about ceremony. Most of the last minute details are done, the cake has been purchased, the dresses all picked out and all of the trimmings.

Since hearing that there were going to be a thousand guests and a $20,000 cake and expensive cars shuttling guests to and from the festivities, we have to wonder if the E! channel is footing the bill for everything? Rumor has it that they’ve even laid down the cash for Kim’s monstrous engagement and wedding rings! I wouldn’t doubt it one bit, would you?

A source said, “The engagement ring presented to Kim in May – fewer than three months prior to her wedding date – is 20.5 carats. It’s rectangular in shape…and it was likely purchased by E!.”

If those rumors aren’t true, we’ve also heard another. Apparently one snitch thinks that Kim foot the bill for the ring herself. Can Kris really afford such an insanely huge ring on his NBA salary? Besides that, there’s always my thoughts on the whole shebang being fake for the cameras… If the wedding is fake, then so is the ring! I guess we’ll all see on Saturday, won’t we?

What do you think? Who bought that huge rock? Kim, the network, her mother, or even her fiancee, Kris?