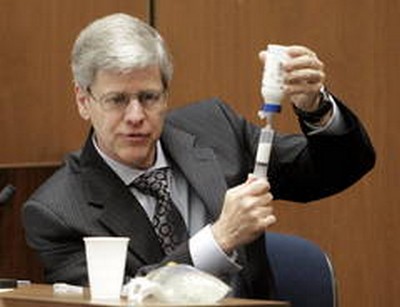 Did a medical expert for the prosecution in the Michael Jackson trial actually help defend Dr Conrad Murray by stating that the drug blamed for his death is “outstanding” if used properly?

Anesthesiologist Steven Shafer – who is expected to be the prosecution’s last witness – took to the stand today in the trial of the late singer’s personal physician Dr. Conrad Murray, who has been charged with involuntary manslaughter of the pop star in 2009 as he is accused of giving him an overdose of Propofol while trying to help him sleep.

Coroner’s officials have already determined Michael died from acute Propofol intoxication and also noted there was anti-anxiety drug lorazepam in the ‘Thriller’ hitmaker’s system in June 2009.

But Shafer defended the drug.

He told the Los Angeles courtroom: “Propofol is an outstanding drug. I would like, hopefully from my testimony in part, the people to understand that when they are given these drugs by people who know what they are doing, they are good drugs and that what’s happened in this case has nothing to do with their experience when they see a doctor for a procedure.”

“Every day, in the operating room, I tell patients what I’m going to do and I’m asked the question, ‘Are you giving to me the drug that killed Michael Jackson?’ I have this question daily.”

The trial continued earlier today after it was delayed for two days on Monday to give defence lawyers more time to study recent testing which was conducted by coroner’s officials on the level of sedative lorazepam in Michael’s system.

Jurors at today’s trial watched a video demonstrating how anesthetic Propofol is safely used to treat patients in operating rooms on a daily basis.

During the broadcast of the tape, the anesthesiologist onscreen discovered his patient is not breathing and the words “call for help” flashed across the screen.

Prosecutors have previously suggested Murray didn’t realize Michael was in cardiac arrest straight away because he was on the phone and that when he did notice, he waited 20 minutes before asking that 911 should be called.

But prior to the video being shown, defense attorney Ed Chernoff called it “a terrifying dramatisation” and attempted to stop it being broadcast to jurors.

He said: “The purpose of the video is not to provide information to the jury. It’s to leave an impression.”

“This essentially is a demonstration of what the prosecution would like the jury to believe occurred.”

If convicted, Murray – who has pleaded not guilty to involuntary manslaughter – could face four years in prison.