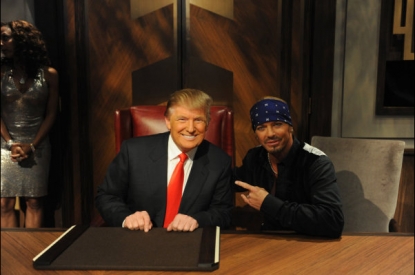 Celebrity Apprentice Donald Trump was the person who convinced Bret Michaels to sue CBS Entertainment and others over injuries Michaels suffered at the 2009 Tony Awards.  Michaels’ lawyer’s filed suit Friday in L.A. because they tried to settle the matter out of court with no success.

“Trump offered to intercede and advised him to sue aggressively, Michaels said, he decided mainly to ask to be compensated for work-time lost due to his injuries, which included stitches with a cut lip and a broken nose.”

Michaels, 48,  won Trump’s Celebrity Apprentice competition.  The accident occured when Michaels’ was performing Poison’s hit, “Nothin’ But a Good Time,” on the Tonys broadcast when a giant scenery piece was lowered and whacked him in the face.  Michaels believes that accident caused his  subarachnoid brain hemorrhage.