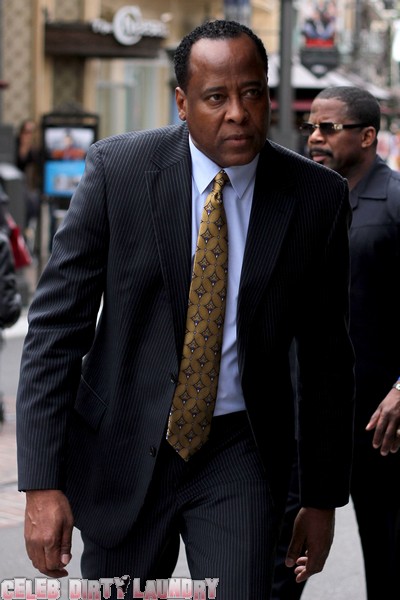 In watching the manslaughter trial of Dr. Conrad Murray, we’ve heard reports that his attorney is dropping the claim that Michael Jackson injected himself with the fatal dose of Propofol in his death.

In his recorded testimony to the police, Dr. Murray told investigators that he left Michael alone for two minutes, in order to use the bathroom. This directly opposed the opening statements of his attorney, which stated that Michael injected himself.

Today, his attorneys are trying to convince the jury that Michael awakened in time to inject himself and that Dr. Murray was actually gone longer, while he was on the phone.

Dr. Murray’s attorney, J. Michael Flanagan suggested that the two minute time period might have been inaccurate. Dr. Murray previously said that he left for two minutes to use the bathroom and when he returned, Michael wasn’t breathing.

During Mr. Flanagan’s questioning of cardiologist, Dr. Alon Steinberg, he said, “Let’s assume Dr. Murray was gone for a period of time longer than two minutes….maybe it was ten…fifteen…twenty…what is it about Michael Jackson that makes him savable?”

It was already stated that Dr. Murray was on the phone for 45 minutes prior to discovering Michael not breathing. So why did he tell investigators that he was only gone for two minutes? Either way, the testimony from the doctors today isn’t doing anything for the Defense’s case.

Dr. Alon Steinberg and Dr. Nader Kamangar both stated that Dr. Murray was grossly negligent in his standard of care on several accounts. He didn’t have a backup battery for the pulsoximeter, he didn’t have a crash cart, he waited longer than the two minutes to call 911 and he shouldn’t have used Propofol to get Michael to sleep, without being in a hospital setting.

Have you been tuning in?