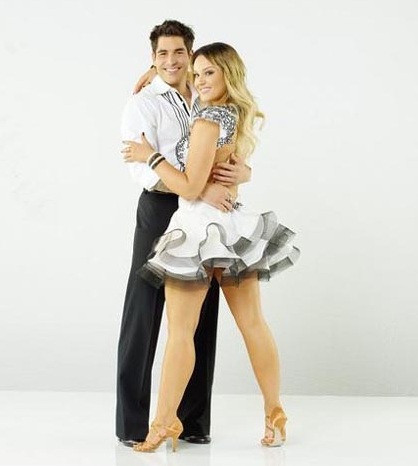 Although they had the lowest scores on Monday night’s premiere of Dancing with the Stars, off the dance floor Lacey Schwimmer and Mike Catherwood are winning in the hot love department.  “The network asked them to tone down the sexual undertones,” a source close to the pair said.   “They know there is a spark there — everyone is talking about their amazing chemistry.”

DWTS veteran and hoofing hottie Lacey teamed up with Loveline’s “Psycho” Mike for the foxtrot on the season 12 premiere which landed them the lowest scores of the night.  But, although they’re still perfecting their moves on the dancefloor apparently they don’t need any improvement when off the floor it seems.

The two haven’t been shy about their flirty feelings for each other, with Mike joking “the best part about the routine was grabbing her butt,” said our source, and Lacey said: “we would make a great couple” and admitting she seen “every part of his body.”  And their attention for each other is definitely getting the network’s attention, if not the judges’ votes.”They basically told them to cool it with the sexual tension,” our source said. “But they both just laughed about it.”

Lacey told us that Mike does have a girlfriend, but our source says that he and his girlfriend are “on the rocks.”  And that is NOT a surprise!
“We definitely have a connection whether we either want to admit it or not,” Lacey said.

Fans will have to wait till next week to see if Lacey and Mike’s sizzling real-life chemistry will keep the couple on the dance floor for another round of the hit contest.

Dancing With The Stars airs on ABC Monday and Tuesdays 9/8 C.