BY Rosie Leblanc on May 24, 2011 | Comments: 2 comments
Related : Dancing With the stars, Dancing With The Stars Season 12 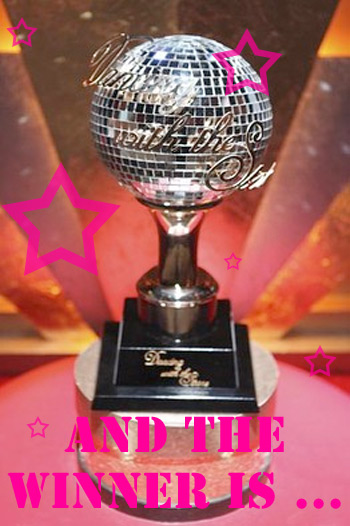 Well here we are, another season of Dancing With The Stars done and what do we think about it?  I think people like Kirstie Alley and Ralph Macchio have boatloads of personality and made the show fun to watch and root for them.  I also think this season it is obvious that the powers that be on DWTS do not want another good dancer to go home too soon – so they added a trick or two to manipulate the resuts i.e. the drop dead Cha Cha that Chelsea Kane won.  Apart from that the season was a bit lack luster.  So who should win well probably Chelsea Kane, although Kirstie Alley is my favorite (not for her dancing skills but for how hard she has tried), Hines Ward has to be the most overrated contestant of this season.  Each time I watched him dance I would think it was okay and the judges would rave.

So if you missed last night’s show catch our recap HERE.  So how will it all go down tonight?  Well, each of the three remaining couples will perform one more routine and the scores they receive will be added to their judges’ scores from Monday night’s dances.

Dancing with the Stars’ twelfth-season mirror ball trophy winner will then be revealed based on the combination of the judges’ score shares for the dancers’ Monday and Tuesday night performances, and the share of home viewer votes cast immediately after Monday night’s broadcast.   Again, tonight’s recap is brought to you by Rosie at Fit Fab Celeb.  Take it away Rosie…

– All of this season’s celebrity competitors dance their way onto the floor, they finish up with streamers exploding everywhere.

– The judges give praise to each of the three finalists – then all three step up to the podiums with their partners.

– The first couple to have been voted out, Mike Catherwood, performs in a barely their skimpy leotard outfit with his partner Lacey Schwimmer – no improvement from the first show and now we have to suffer a walk down memory lane with long list of voted out competitors.

– Kendra Wilkinson & Louis van Amstel take the floor with three professional dancers to Livin La Vida Loca,ironically the words in this song are ‘bullet to my brain’ cause that’s how I feel when I watch Kendra, I keep remembering all her excessive whining.

– Micheal Buffer introduces ‘Let’s Get Ready To Rumble’ rumble, between Chris Jericho and Sugar Ray Leonard. At the end of the dance, Chris says that he missed Bruno Tonioli so much that he worked on a  Bruno impersonation and he delivers it on the judges table and gets a huge hug from Bruno.

– The Go-Go’s perform with Maks Chmerkovskiy in a Police uniform looking like a Chippendale dancer, dancing with Chelsie Hightower, Cheryl Burke and Lacey Schwimmer.

– Lil Romeo takes the floor to waltz with partner, Chelsie Hightower with children’s choir singing Greatest Love of All. after the dance, Romeo professes his love for all the judges and announces to the nation that the world did not end yesterday, duh.

OMG, the camera zooms in on Sarah and Todd Palin, right next to Bristol. Barf! Couldn’t we have finale without them?

In their final dance, Chelsea Kane & Mark Ballas dance the ‘Wizard’ Vienesse Waltz. Bruno: We were all under your spell, never put a foot in wrong, I love you. Carrie Ann: A lot of people didn’t know who you were before coming on the show, but now they do, you are graceful and beautiful.

In their final dance, Kirstie Alley & Maksim Chmerkovskiy dance their same dance from week 1, the Cha Cha Cha to show how far she has come from the beginning. One thing is for sure, there is a heck of lot less of her! Wow, what a Diva. Bruno: It was 100%  fruit cocktail, brilliant. Carrie Ann: I love you for being you, the transformation and magic. Len: You’ve overcome your weaknesses and tonight, it was your best dance.

In their final dance, Hines Ward & Kym Johnson dance the Samba. Carrie Ann: Hines, you are the MVP, you led your partner out of an injury. Len: Dance is the product, what is so appealing about you is the package, you bring every dance to life. Bruno: A killer when you play sport, a charming dazzler when you dance. 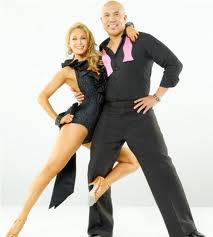