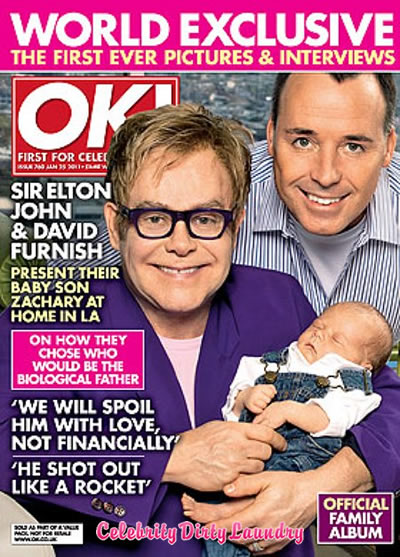 Proud parent Elton John beams as he debuts his new son Zachary Jackson Levon Furnish-John who was born on Christmas Day.  Elton with his husband of five years David Furnish appear on the cover of Britain’s OK! magazine looking beyond happy.  Zachary was born by surrogate but Elton and David are his legal parents.  The identity of Zachary’s biological father is not known.

Speaking at his Los Angeles home, he told OK! magazine: “He shot out like a rocket. There just aren’t proper words to describe that feeling. It’s indescribable. It was just, ‘We have a son’!”

Zachary was mothered by a surrogate, but Elton and 48-year-old David are the youngster’s legal parents.

Yet the multi-millionaire rocker emphasised the child would not be spoilt. He added: “I’m ready to have a child and lavish my love on our son and not spoil him.”

Elton and David look very happy!  Congrats to them!