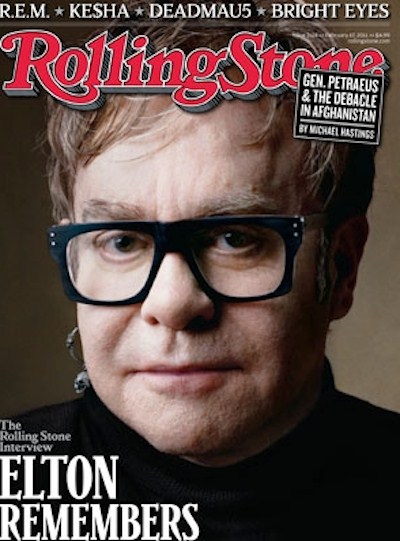 After last week’s Elton John cover controversy where our friends over at Earsucker.com scooped everyone with the story.   Elton is now on the cover of Rolling Stone magazine and is talking about his friend Eminem.  Eminem, 38, sang his song  “Stan” at the Grammy’s in 2001 with Elton John, 63.  The two became friendly and Elton mentored him through his difficult times and even helped Eminem beat his drug addiction.   Elton has said that they  have a special relationship they even have pet names for each other “We have such a laugh. We call each other cunts.  I ask him how he’s doing and tell him how proud I am of him.”

When Elton married his partner David Furnish Eminem sent them a unique present quite x-rated.  “In a case, on velvet cushions, were two diamond cock rings. So there’s a homophobe for you [laughs].”  It seems Eminem has a sense of humor :-)

Elton says he is very proud of Eminem and how hard he has worked on his sobriety.   He does not see him much but the two talk a lot.   Meanwhile Eminem is singing on a new song with Dr. Dre “I Need A Doctor”  the song is off the hook – if you have not heard it listen to it HERE.