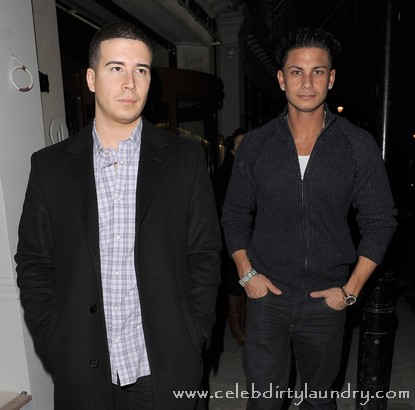 Pauly D and Vinny Guadagnino were in London town to launch series three of Jersey Shore and host an MTV Miss Jersey Shore UK beauty pageant.  In a sign of the times Jersey Shore is MTV’s most watched show ever, and a couple of the stars hit Great Britain for the first time last night.

The lure of spending time with the reality ‘hunks’ attracted Sarah Harding, 29 and Kayla Collins, 23, as well as a variety of d-listers to Mahiki, the lucky venue hosting the competition.  Pauly and Vinny said they enjoying their first visit to England and admitted the global success of the show had taken them by surprise.

Pauly D explained: ‘We didn’t think that it was going to blow-up the way that it did.’  Vinny added: ‘That’s why it’s such a hit because we didn’t go into it with that mentality, we just went into it like regular people, we didn’t know what we were doing.’  Pauly D hit back at critics who claim Italian Americans are stereotyped in Jersey Shore.  He said: ‘I don’t agree with any of that. I’m proud to be Italian, I don’t represent all Italians by any means, I only represent myself.’

These guys are too funny and they don’t even know it.

Appearing on the Daybreak show in England, hosts Adrian Chiles and Christine Bleakley were made to understand some of the Jersey Shore slang, such as ‘fist-pumping’.  ‘It’s what you do in a club, we listen to a lot of house music,’ explained Vinny.  Adrian stopped Vinny before he could explain what a ‘grenade’ was.

Series Three will see cameras follow the gang as they travel to Italy.  Pauly and Vinny said that they’d love to be involved with the mooted British version of their show – Geordie Shore.

Pauly said: ‘I think it’s great!  When you’re at the top of your game, you’re going have people who wanna do the same thing. I wanna see it!  I hope they don’t try to like, be us though. They should let us judge it.’  Vinny added : ‘I want a special guest slot and I want a girl to pick me up in  a club, I want to be the guest.’

When are the Jersey Shore dolls coming out – I want a complete set.