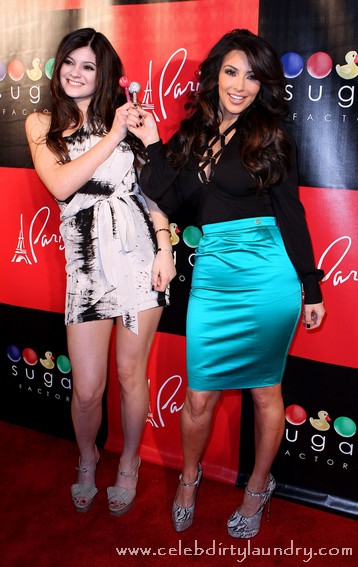 Yesterday I found myself in my Las Vegas hotel room watching an hour-long episode on the E channel about Charlie Sheen.   For that, and that alone, I refuse to mention the actor’s name whilst on my little Vegas vacation.   After Thursday…well maybe…

In my quest to find out which celebs were gallivanting in Sin City over the weekend, it didn’t come to a surprise for me when I discovered the lovely (and always busy) Kim Kardashian was in town.   The socialite (and now newly recording artist) not only made an appearance at the opening for the new and posh hot spot ‘Sugar Factory’, but also brought along her 13 year old sister, Kylie Jenner as her date.  What would papa Bruce say?!

Kardashian tweeted her excitement on Friday, saying “Vegas baby! Heading to Sugar Factory! I brought my little sis @KylieJenn here to Vegas w me, she’s never been before!” And what a way to be introduced – I wish I had a big sis who brought me to Vegas when I was 13!  I’ve said it before and I’ll say it again, those two Jenner girls are going to have a lot to look forward to judging by the path they’re famous older sisters are carving out for them.  That and they’re mom is Kris Jenner.

Other celebrities who made appearances and walked the red carpet were Holly Madison (who has been living in Vegas while filming her reality show “Holly’s World” and performing in “Peepshow”), Mel B, Nick Cannon, Whitney Port, hip-hop artist Drake, and NFL star Reggie Bush.