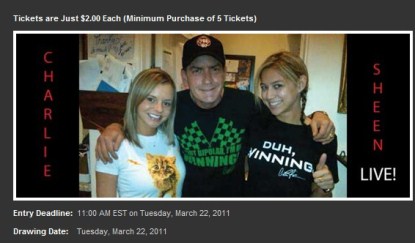 As most of you know, Mr. Sheen his hittin’ the road with his tour “Live: My Violent Torpedo of Truth.” For all you poor unfortunate souls who weren’t quite able to score tickets to one of his shows–many of which have sold-out entire venues–you have one more shot.

Sheen’s Winning for Charity raffle is currently giving away two tickets to the show he’ll be doing in Detroit on April 2. The raffle will be running until March 22, with each ticket costing $2.00 (minimum purchase of 5 tickets) with all proceeds going to benefit the Celebrities for Charity Foundation, as well as several others of Sheen’s charities.

Winners will have the opportunity to hang out backstage, receive VIP treatment, and potentially get to meet the actor.
ET Online says that Sheen Tweeted saying,“Time to wake up. Trade some charity coin, for the spotlight with the Warlock. On the Stage. Opening night. No joke.”

Sheen is expected to earn millions off of his live tour.

Check out http://www.celebritiesforcharity.org/raffle/charlie-sheens-winning-for-charities-raffle/ for more details and a chance to win! Celeb Dirty Laundry wishes you luck!