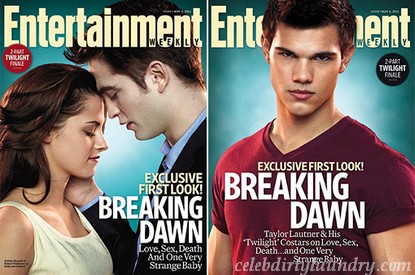 If you haven’t guessed yet, it’s Twilight mania leading up to the release of the two final movies!

Entertainment Weekly is jumping into the Breaking Dawn craze with their latest covers, showing Kristen Stewart and Robert Pattinson, along with another cover featuring Taylor Lautner!

Of shooting the final scenes for the upcoming movie, Kristen said, “It was one of the coolest things that I’ve done. There was a certain point when I walked on set, and I saw everyone from the entire cast sitting there in the pews, about to do their bit. And it was just so perfect for me in that moment. It was so emotional in such a real way. I literally felt like thanking them for coming.”

You can expect to see more Breaking Dawn news as the movie inches closer to being released. Are you excited??? I want to see Bella as a vampire!