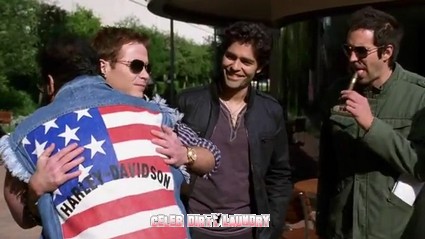 The final season of Entourage premieres tonight on HBO and stay with us as we recap the show as it unfolds.  Before we get started with tonight’s show just to remind you where we were at the end of last season.  Last we saw the boys, Vince’s life is falling apart as he goes on a cocaine binge at a party given by Eminem and gets into a fight.  Vince ends up in the hospital badly beaten.  Ari and his wife are fighting.  Sloan‘s father is demanding that E sign a prenup before they get married.  Turtle has gotten Mark Cuban to invest in a tequila brand and Drama has a new animated series about a gorilla.

All of our favorite guys will be back tonight: Adrian Grenier; Jeremy Piven; Kevin Connolly; Jerry Ferrara and Kevin Dillon and I am sure they will all be up to their eyeballs in all sorts of trouble.  I just can’t wait!

So let’s get started with tonight’s RECAP.  The show starts tonight at E’s (Eric) office and Sloan is on the phone.  She tells him she does not want to get into another fight she just wants his stuff out of his space.  He hangs up and asks if they have had any word from Vince.

Next we see Vince over at rehab he starts off ‘My name is Vince, and I am an addict.’  He has been in rehab for 90 days.  Vince tells a girl sober is sexy.  All the members of rehab are congratulating him.

Drama is talking to Vince and is telling Vince he is glad to have him home (meanwhile Vince is cleaning the house of drugs)  Drama is screaming at Turtle cause he found Advil in the house.  He asked Turtle to get rid of all the drugs.  Drama emptied all the booze and replaced with non -alcohol.  Drama looks up and Turtle is smoking a joint.  Drama freaks and sprays him with air-freshener.  Drama is a hoot he is making sure there is nothing left in the house.

Eric is meeting with Johnny Galecki, a new prospective client and he is asking if Sloan (E former girlfriend) is single.  Eric  says he has to leave because Vince is coming home.  Scott and Vince are arguing and tells Eric he is coming to get Vince too.  Secretary came in and tells Eric that Ari wants to know if Eric wants to drive with them to pick up Vince.

We are over at Ari’s office and he is telling his son he has to go to school and the son says he will go to school when Ari comes home.  Lloyd comes in and says that a person from Modern Family wants to move.  Ari says he does not have time.  Lloyd tells him that he has not had time since he separated from his wife.

We are over at the rehab and the press is there and the guys are on the way.  Eric is upset because he is the only one Vince did not call.  Vince walks out of rehab and there are three cars (the guys all brought cars)  Vince drives with Drama.  They go to lunch and the waiter asks if he wants a wine list and Drama freaks NO.  I love Drama!

Ari asks him if he wants to go back to work.  Eric tells him he will have to submit to drug tests.  Vinnie asks when he goes back to work and Ari tells him he goes to work in Europe.  Vinnie asks what does he do till them and Ari says we will look.  Vince tells him about something he saw on the news and he wants to act in it and direct.  Vince then says he has to go to the bathroom and they send Turtle to watch him.

Drama tells them Vince needs time to adjust.  Vince gets back with Turtle who followed him.   They leave and are getting home and Vince is still talking about the movie.  Drama tells him Vince is fragile and not to tell him they are not interested in the movie.

Drama tells Eric that Sloan gave him her engagement ring and Eric freaks because it is a $30,000 ring.  Vince is telling them he wants to call Dana Gordon to make up for how he behaved.  They tell him to wait a bit.  Vince wants to eat and he wants to cook, but the guys want to order pizza.  Vince gets upset and then Drama tells him they planned a homecoming party.  Vince goes to rest.  They ask Drama what the hell who will they invite and Drama says someone sober.  They don’t know anyone sober and then all agree Director Billy Walsh.

Ari has showed up at his wife’s house he tells her he wants to come home.  She says no it is not long enough.  He says it has been 8 weeks.  He has scheduled therapy for them.  Ari asks why he cannot come home and she tells him she has been seeing someone, he leaves upset.

Back at Vince‘s house Drama is blowing up balloons.   Drama is freaking because Turtle did not clean the garage and there is beer there.  Scott has called 5 girls and made sure they don’t drink.  The doorbell rings and it is Billy Walsh.  Vince asks if there is anyone else and behind Billy is a bus full of girls.   This makes Vince’s party complete.  Needless to say Vince was happy.

Eric is calling Sloan and is bitching because she sent back his ring and says he hopes she insured it.  He gets so frustrated he finally yells F*ck you!  Scott asks him to focus that his best friend is back.  Eric says he needs a beer, he tells Scott he has two beers in the bushes.

Vince tells Billy Walsh about the movie he wants to do.  Ari walks in and he is upset.  Vince tells him to have a drink he won’t mind.  Vince tells him there is Vodka in the freezer.   Drama tells Vince about his monkee movie and he says he would love to see a clip.  Scott says he has one in the car and he goes to get it.

Vince asks what is wrong with Eric.  Eric asks why he is pissed at him.  Vince says lets talk.  Drama tells Eric, Vince does not need stress.

Drama runs to Turtle and tells him that Eric is trying to stress Vince and he needs to help.  Eric is asking Vince why his anger is directed at him.  Vince is telling him that friendship comes first, but he needs a big year and he thinks the movie is the one that will bring him back.  Eric tells him as his friend he tells him it is a good idea but for business the movie sucks and he hates it.  Turtle shows up and Vinnie asks him what he thinks of his movie idea and Turtle says ya it is good.  Vince says WOW and he realizes Turtle does not like his movie either.

Then we are over seeing a clip of Drama’s cartoon.   Vince walks in and Drama asks what is wrong and Vince walks out of the room.

A girl comes in the room and she is screaming Vince is having a heart attack.   The guys run in and Vince is drinking a beer.  Drama tells him it is okay it is not real.  Vince says that is the problem no one is being real with me.   Vince says you have to tell me what you think about the movie and they all admit they think it sucks.

They hear a dog barking and realize the house is on fire.  Turtle says he is sorry and Vince says it is okay it is a good omen as Vince’s house burns down!  That is it for tonight!  Stop by and visit us next week and let us know how you liked the show in the comments below!