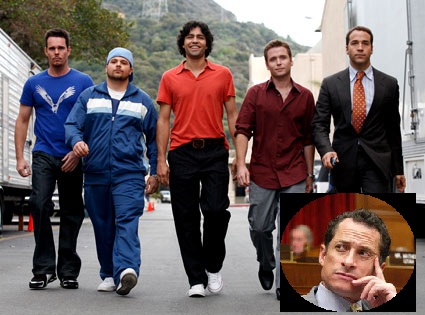 Even thought Anthony is jobless today he has an interesting offer on the table so you won’t be seeing him in the unemployment lines just yet.  Hollywood wants Anthony! Entourage executive producer Doug Ellin tells the Hollywood Reporter “that he recently reached out to the now ex-congressman to appear in a cameo on the HBO hit, which is returning July 24 for its eighth and final season.  So far, he’s heard “nothing” from Weiner.”

Anthony got the offer before he resigned and he did not respond to it.  Hollywood loves scandal and Weinergate was a scandal!  Now that he has no job perhaps Anthony will consider spending some time with Vincent Chase and the guys.  What do you think about seeing Anthony Weiner on Entrourage?  Would you watch the show?