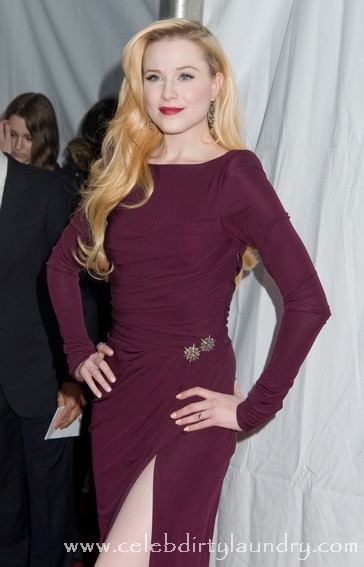 Evan Rachel Wood, 23, is in the five part  HBO mini-series ‘Mildred Pierce’.   In the mini-series she plays the daughter of Kate Winslet and the role called for her to do her first nude scene.   Wood was not comfortable with the idea but she got some tips from her co-star Winslet who has had several nude scenes in other movies.

Wood revealed, “She coached me through my first nude scene.  I mean, she’s done it all.   She was literally next to the camera going [thumbs-up].”

Winslet advised her to cover up as much as she could and to try to have the least amount of people in the room as possible during the scene.   “I looked at Kate and she was like, ‘You’ve got to do it. Trust me, it’s so brave.’

During a recent interview Wood explained to the interviewer how she got through the nude scene “‘Put a merkin on and you’ll be fine.'” (A merkin is a pubic wig.)