Kris Herzog who was Oksana Grigorieva’s bodyguard spoke exclusively to Celeb Dirty Laundry about his career, his celebrity clients, and his life with Oksana and Mel Gibson.   Kris’ 25 year career with the rich and famous started with The Bodyguard Group of Beverly Hills, a 43-year-old company, founded in 1967 by his Dad, finding jobs for no fee for U.S. Armed Forces Veterans.   Kris has worked with Paris Hilton, Kim Kardashian, Jack Nicholson, Jon Voight and many more celebrities. Visit his website to see pics of all the celebs he has worked with.

Probably Kris’ most famous stint occurred recently when he worked as a bodyguard for Oksana Grigorieva, had an affair with her, and was privy to all the details of her relationship with Mel Gibson.   Kris believes that the majority of facts about Oksana and Mel have not yet seen the light of day – including some of the most shocking.   Kris’ new book will answer questions and bring to light shocking and explosive details of the often twisted relationship between Mel and Oksana.  He has pictures, e-mails, text and voice messages that substantiate all of his claims.

Kris reports that he has over 30 facts that have not yet been released to the press – below are 10 biggies that he told us about exclusively:

1. Molestation? Will there be allegations? – this will be highly explosive – we were truly shocked by what Kris told us!
2. What really happened on January 6th, 2011 – the day of the big fight when Mel supposedly punched Oksana while she held baby Lucia?
3. What really happened on February 18th, 2011; why Oksana and Mel broke up; why they got back together before Valentine’s Day?
4. There were 41 recordings – why were there only 9 released?
5. What are in the missing tapes? What have we not heard?
6. What transpired during Oksana’s May 15th and 16th, 2011 mediation and her alleged extortion of Mel Gibson?
7. Why Oksana really refused the 15 million and why she now wants 100 million?
8. Why Oksana went through 42 attorneys?
9. What really happened at the infamous Oksana/Mel attorney meeting on which a gag order was issued?
10. Is there a sex tape featuring Oksana with Kris? 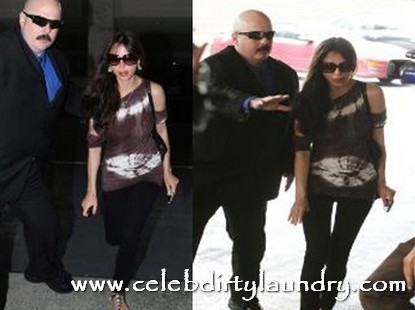 Below are some excerpts from his new book:

Chapter 1: Growing up in Avalon on Catalina Island with my wealthy Grandmother and her Celebrity friends, John Wayne, Marilyn Monroe and many others, Getting kicked off of Catalina, Juvenile Hall, Joining the U.S. Army, Desert Storm Iraq, and much more …..

Chapter 2: Entering my Dad’s Celebrity Bodyguard business, 1st Bodyguard job at The Sunset & Gower Studios for a girl with my 1st name, Kristian Alfonso on Days of our Lives, Bill Cosby, then The Tonight Show with Johnny Carson and more….

Chapter 3: Fighting with the aggressive criminal paparazzi, stalkers, clients and entourage members high on every drug you have ever heard of and a few you have not, going to a very dangerous county jail, jail riots, rape & murder, almost dying in county jail, getting out of jail homeless and broke, protecting Paris Hilton & others while living in my car and getting back to the top of the Celebrity Bodyguard business, having the same Probation Officer as Lindsay Lohan, Paris Hilton & Henry Hill of the “Good~Fellas” movie.

Chapter 6: A top 100 photo recap of my 25 years in Elite Celebrity Executive Protection with OVER 50 Celebrities during the biggest Media/News stories of our time, inside the storm with them all, Murders, Divorce, Kidnapping, Sex, Drugs & Rock and Roll….

Chapter 7: Storm Brewing; Meeting Oksana, a Sexual Sorceress who Seduced me with her suffering. I thought I was protecting a real domestic violence victim, I was very wrong.

Chapter 8: Enter the Storm, Mel Gibson and Oksana, she played my sentiment, like a cheap instrument…..

Chapter 9: The Heart of the Storm, The Bodyguard becomes the Lover, making love to Oksana, if lips were ships then her lips were the S.S. Titanic – dragging men down deep….

Chapter 10: Storm Surge; Becoming Chief Adviser to Oksana and attending all the Attorney meetings with her pertaining to Mel Gibson….

Chapter 12: Becoming the #1 witness in the biggest Celebrity Break up case of all time and my life after the Storm of Mel Gibson & Oksana…. Everyone involved went from hero to zero in less than 60 seconds.

Stay with us because we will be speaking to Kris Herzog again soon for more exclusive details about Mel and Oksana and his larger than life celebrity experiences – watch Celeb Dirty Laundry.

For more Kris Herzog info and his Official Celebrity Bodyguard BIO, plus 1000’s of photos and videos about Kris Herzog’s Book go here: