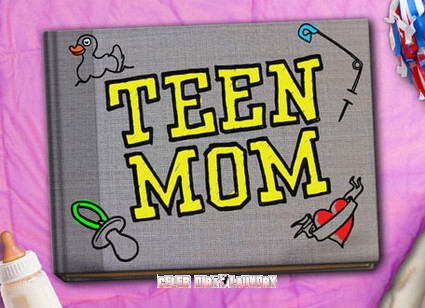 The ‘Teen Mom’ reality TV phenomenon is designed to provide a close up look into the heart of a very messed up world, and it does. But being one of the ‘stars’ of this particular reality show or its scandalous sister, ’16 and Pregnant’ seems to augur poorly for the ‘lucky’ moms.

For example, people tend to stare at 19-year-old Maci Bookout.  “On the weekends that Bentley’s dad has him and me and my friends go out … to a club or something,” she says, ” can tell that people are, like, watching to see how I’m going to act.”  The Chattanooga, TN mother of a 2-year-old named Bentley is one of the stars of MTV’s ‘Teen Mom.’

Bookout and her co-stars — Farrah Abraham, Amber Portwood and Catelynn Lowell — made their TV debut on another MTV reality show, ’16 and Pregnant.’  The series was so successful that the network got them to star in the ‘Teen Mom’ spin-off. Nielsen reports some 3.65 million viewers tuned in to its third season premiere on July 5.

Viewers watched Lowell and her boyfriend Tyler grieve over the daughter they gave up for adoption, Abraham’s ups and downs with her mother and Bookout navigate co-parenting with her ex-fiance Ryan.

Motherhood has made the teens instant celebrities, with tabloids, paparazzi, and bloggers hot on their trail.  But Abraham, 20, who has a 2-year-old daughter named Sophia, doesn’t think that having a baby should make her a celebrity or a role model – Duh. “By no means do we think, ‘Oh, it’s cool to be a teen mom.’ I definitely don’t think that it’s cool,” she says.

Fame hasn’t been easy or beneficial for all the teens, particularly 21-year-old Amber Portwood, of Anderson, IN, who was given probation in June after pleading guilty to two domestic battery charges against Gary Shirley, the father of her child. The incidents aired on the reality show.

The following week, Shirley called 911, fearing Portwood was about to hurt herself. The reality star was hospitalized and is now undergoing treatment at a rehab facility. Her child, Leah, is living with her father.  “I love Amber. I mean, I hope that she just keeps her head up and she knows what she needs to get done and stays strong,” says Lowell, 19, of Port Huron, MI. “I think where she’s at is good for her right now and she just needs to focus on getting better.”

What about Aubrey Wolters Akerill, another ’16 and Pregant’ star gone bad – arrested with her baby while shoplifting and in possession of illegal drugs!

People make mistakes and screw up their lives – people who are still children themselves get pregnant and have babies – turning these tragic mistakes into reality TV shows is simply wrong, the fact that they are so popular is pathetic.