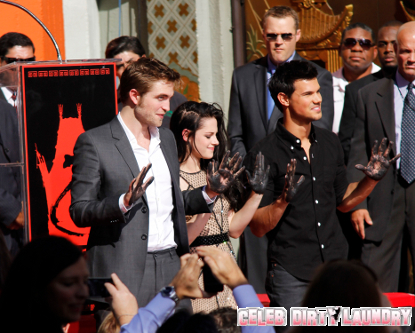 Robert Pattinson ran into a little trouble on Wednesday in Los Angeles.  The Twilight star was promoting Breaking Dawn Part 1 on Jimmy Kimmel, and as he was leaving the building a crazed fan – surprisingly not a female – broke away from the crowd and ran towards him.

As you can imagine the security was on guard and came to the rescue.  Whether it was Rob’s own security or that of the networks, they didn’t miss and beat and quite possibly saved poor Rob’s life.  Ok, it wasn’t that dramatic but you get the idea.  As the chaos ensued a bodyguard came to Robbie’s rescue and wrestled the man to the ground.  Phew!

It can’t be easy being Rob, what with all the screaming hoards of fans that would do anything just to touch you.  Story of my life.  Rob played it cool like the easy-breezy guy he is, signing autographs and smiling for fans.  Aw, what a nice guy my man is!

(Above picture: Twilight stars are honored with a hand and footprint ceremony outside the Grauman’s Chinese Theater!)